Nikolaj Coster-Waldau’s Jaime Lannister led the charge as Game of Thrones overthrew the old kings of TV (what were they again?) Now poised for total dominance in preparation for season 8, he’s remarkably relaxed for a man with one hand on the crown.

Unless you’ve been living under Casterly Rock for the last few years, you’ll be aware that water-cooler conversation has recently become a lot more fantastical. The sixth season of Game of Thrones began as the most successful smallscreen production ever.

Related: Is Game of Thrones Making You Fat?

The fourth season averaged 18.4 million viewers per episode (by comparison, The Sopranos peaked at 18.2) and cost in the region of R71 million for every hour of murder, magic and decapitations. It’s the most pirated show in the world and US President Obama’s favourite. On-demand television is the new battleground of quality drama, and Game of Thrones is winning the war. Even so, Nikolaj Coster-Waldau is keeping his head down. As far as he’s concerned, it’s not his fight. As Jaime Lannister, he started out as the arrogant swordsman who announced himself in the very first episode by defenestrating a seven-year-old boy.

By the current season he has become the most unlikely of antiheroes, his character arc following the upward curve of the show’s growth into an international giant. MH met the 44-year-old Dane in London, before he flew to Spain for more filming. In front of our camera he is all wiry energy and strength, spinning on the rings and pull-up bars, engaging everyone who passes. But in the quieter moments, between coffees and cigarettes, he is calm and considered. “I think the danger for any actor in a successful show is that you can feel really important.

Related: Conor McGregor Will Appear On Game Of Thrones. Could He Take Down ‘The Mountain?’

Coster-Waldau and his PT Jesper Mouritzen mix big lifts with mobility moves using the 5-3-1 system. Start with 75% of your max weight for 5 reps; rest; do 3 reps with 80%; rest again; then do 1 rep at 90% max. Perform his two sessions for a month to see mountainous results. 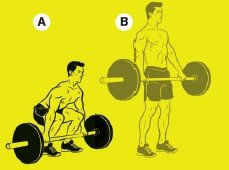 With the barbell on your back (A), bend at the hips until your chest is parallel to the floor (B). Keep your back straight. 5 sets of 12 reps. 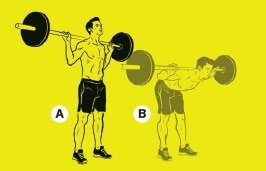 Related: This Simple Trick Uses A Barbell To Work Your Core

Hang from the bar with knees and feet together (A). Lift your thighs to your chest (B), pause and release back down. 5 sets of 15 reps. 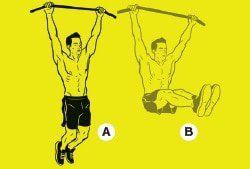 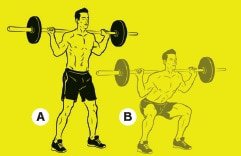 Related: Why All Men Should Deep Squat for 5 Minutes a Day

From standing, bend to place your hands on the floor (A). Walk them out in front of you to lower (B) then back up. 5 sets of 10 reps.

Set a box at hip height. Squat (A), then spring upward, landing with both feet on the box (B). Step down and repeat. 5 sets of 10 reps 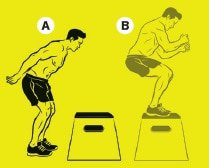