Why Do Some Six Packs Look Weird?

The reason you get uneven or crooked six packs

Men’s Health Fitness Director BJ Gaddour’s abs have appeared on the cover of books, in fitness DVDs, on the pages of magazines, and in social media fitness videos. While most men get inspired by his shredded torso, a handful of guys have a totally different response. “I usually get a few people that say, ‘Your abs are weird. They’re crooked,’” says Gaddour. (That’s his six pack in the photo below.)

Related: One Minute To Ripped Abs! 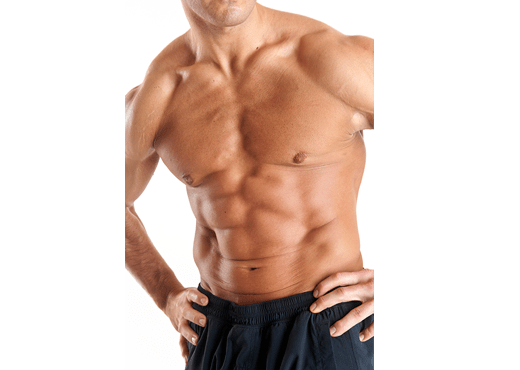 Uneven or not, most people would gladly take Gaddour’s abs any day of the week. But the comment did get us wondering why six packs can look so different from one person to the next. So we posed the question to Dean Somerset, C.S.C.S., an exercise physiologist in Edmonton Alberta, Canada.

Like cleft chins, hair colour, and finger length, your abs are usually determined by your genes, says Somerset. If mom, dad, grandma, or grandpa are fit enough to rock six packs – which usually means that their body fat is 12 percent or less – you’ll probably notice similarities between theirs and yours.

Maybe your abs are well defined, popping out like cobblestones. Or maybe they’re more indistinct, resembling a smooth, brick wall. The difference comes down to the size of your abdominal muscle bellies and the length of your tendons, explains Somerset.

Related: This Helicopter Plank Ladder Combo Will Wreck Your Abs

Let’s start with the muscle belly. This is the middle of the muscle, where it’s biggest. “Some people are born with thicker ones,” says Somerset. “This can make the abs look more pronounced since there’s a higher peak on each one.”
Guys who look like they lift heavy yet have never actually picked up a barbell are often blessed with these types of muscle bellies. It’s easier to see their abs because the highest point of the muscle is plumper, he explains. If you have thinner muscle bellies, on the other hand, your abs will appear flatter. That’s because the peak of each abdominal muscle is lower, says Somerset.

Your tendons – which attach muscle to bone or muscle to muscle – play a big role in your washboard’s appearance, too. They can determine if your abs appear farther apart or closer together. If you’re born with longer tendons, there will be larger gaps between each ab muscle. Shorter tendons, smaller gaps.

To put this in perspective, think about your calves. Do they sit high on the back of your leg and look like cannon balls? Then you have a longer tendon running from your ankle to the muscle. If your calf takes up more real estate on your lower leg, you have a shorter tendon.
As for uneven, asymmetrical abdominals, that’s a genetic trait, too, says Somerset. “We see crooked abs in cultures all around the world, so there’s probably no evolutionary reason for them,” he explains. It’s just passed down from generation to generation like attached or unattached earlobes.

Related: The Science of Building A Six-Pack

But in some elite cases, training can determine what your six pack looks like, he says. If you do a lot of rotational movements – like repeatedly throwing a baseball on a daily basis – it may result in a visibly tilted torso or muscles that look diagonal. Your muscles develop more on one side, causing the entire abdominal region to shift so you look slightly rotated. “It’s your body adapting so you can throw better,” he says.

Bodybuilders want their abs to be 3-D on stage. So when they’re getting ready for a competition, they’ll do shorter-range movements at higher volumes. This helps develop a higher peak in their muscle bellies, says Somerset. One way they do this: At the end of each rep of a crunch, they squeeze their abs as hard as possible.

Powerlifters, on the other hand, aren’t worried about making their abs pop. They’re only worried about their performance. That’s why they use high-pressure breathing techniques to generate as much explosiveness as possible. This results in thicker, denser abs and tendons with little separation – and it’s why many powerlifters look as if they swallowed a keg.

“A powerlifter needs an abdominal wall that’s strong enough to handle the massive amounts of weight,” says Somerset. If they don’t, they could suffer a hernia or diastasis recti, a tear in the tissue above the belly button that connects the two sides of your abs, he explains.

Related: Do These 19 Exercises And You’ll Carve A Rock-Hard Six-Pack

As for Gaddour, he stands 6-feet-two-inches tall, weighs 100kgs, and his body fat hovers somewhere around 6 percent. He’s the embodiment of shredded. At the end of the day, he’s not losing any sleep over his “weird” six pack.