Three men found themselves finishing this challenge in May 2019. These marathons involved training, blood, sweat, tears and a whole lot of blisters.

There’s no doubt you’ve been scrolling through your Instagram and stumbled across a post that just makes you think, ‘why would someone do that?’. Whether it’s squatting a few couple hundred kilograms, swimming in sub-zero waters or something in-between, people complete crazy feats for different reasons.

Related: These Are The Best Trail Runs And Ultramarathons You Can Do In South Africa

So what was the reason a group of guys ran 7 marathons across 7 countries in 7 days? Well, it’s all for a good cause. “The idea behind run777 is that it isn’t a race to the finish line. It’s an epic adventure of achievement, camaraderie, breathtaking scenery and pushing [yourself] and [your] teammates to achieve something [you] never thought possible, all whilst raising money for a charity that will improve children’s lives.”

Here’s the story of how 3 men found themselves finishing this challenge just over a week ago.

1. Take On A Challenge That Scares You 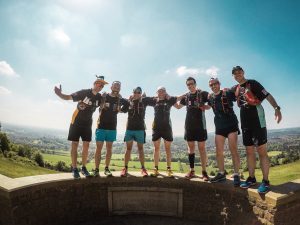 Oliver Bath and a few of his local running mates, unofficially named ‘The Sounds Good Run Club’, all had at least one marathon under their belts. They had experienced that euphoric feeling of crossing the finish line for the first time, after months of blood, sweat and inevitable blisters. But, they were hungry for more, what exactly it was, they weren’t sure.

And then it came to them, they wanted to push themselves further than one marathon on one day in one country so they settled on lucky number 7; 7 marathons in 7 days across 7 countries. Except, it was initially dismissed as ridiculous before gradually gaining acceptance. The ‘Sounds Good’ Run Club protests went from ‘that’s impossible’ to ‘sounds good’. They formulated a plan, secured a coach from Greyling Coaching, and started their 7 months of training. “And run77 was born,” recalls Oliver.

2. Give Yourself Enough Time To Train

Training through a European winter or African summer is no small feat. Starting in September 2018 each runner kicked off their training with 40km weeks, building at 10% a week to meet the 100km weekly target, that according to their coach would have them ready to take on the challenge.

Over the course of the 7 months, each runner clocked over 1,500 kilometres of running. To put it into perspective, that’s the distance from Jozi to Cape Town.

Related: Why Mobility Training Will Increase Strength And Decrease Injuries

3. Find Something That Motivates You 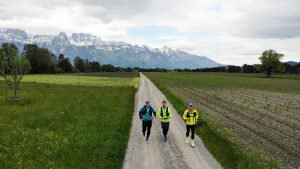 Although the bulk of the training mileage completed by each runner was done solo, because of full-time jobs and families, between WhatsApp, Facebook and especially Strava, the runners still managed to remotely support and motivate each other. Coupled with the group camaraderie was the motivation of running for the Bokomoso Education Trust.

But even the training wasn’t all smooth-sailing. “For me, the toughest parts were during the training and not over the 7 days – that’s fuelled by adrenaline and hype. It’s getting through the 7 months of mundane, and in many cases, solo hours of training to get you to the start line, that put you in a precarious position to potentially give up. Knowing that the small things add up to the big things and reminding yourself that the daily mundane runs of a training schedule [adds to a] bigger goal, helps you to get through each week,” says Ollie.

According to Ollie, the biggest challenge year one presented was a lack of experience. He knew that, logistically, they could cover the 7 countries in seven days without much of an issue. The real challenge came down to the combination of the physical feat of running 7 consecutive marathons with the logistics of driving 7 countries in 7 days. But they had done the work, they had put in the mileage and prepared well.

But there’s another kind of training a lot of people overlook when training for a marathon; the mental challenge.

“For the most part, runners will complete the runs, as they’ve done the training, so the challenge here is learning how to enjoy yourself when the going gets tough,” he says.

“Mentally, the challenge only really starts to kick in on day 4. The toughest day on both tours has definitely been day number 4. This is when the adrenaline starts to wear off, the fatigue of running three marathons kicks in and the reality of the four marathons still ahead becomes real.”

Related: Sick Of Running? Change This And You’ll Change Your Mind 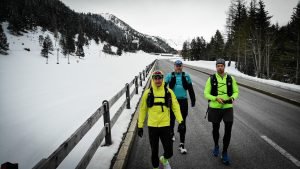 “In this year’s event marathon number 4 took place in Liechtenstein and started in the snow at an altitude of 1,600m which we had to descend down 1,000m to 400m in the first 10km… pretty much running down a ski slope.

“That’s what gets us to the end of every day, the idea that we start together and we finish together.”

“On this day one of the team member’s knee packed-up and we had to grind through a 7-hour marathon to get to the finish line. In this event, however, it is not a race against other athletes, this is a challenge of performing under intense situations, to not only motivate yourself, but motivate others to carry on going and get across the finish line. “That’s what gets us to the end of every day, the idea that we start together and we finish together.”

That’s something Ollie warns people about; the great unknown. “Expect the unexpected, knowing that not everything will go to plan is good preparation in itself as it allows you to cope with challenging situations in a light-hearted way.”

And it’s not just the race you can’t anticipate, it’s the people and emotions, too. “Your training doesn’t prepare you for how the people around you will react when they are under immense physical and mental strain. It is an intimate 7 days, where you are spending a lot of time with people going through a rollercoaster of emotions – from the complete euphoria of a finish line to the depths of despair at 32km on run number 5.

When those inevitable tough days roll around, it’s important to have something bigger than yourself to run for; for them it was Bokomoso Education Trust.

Related: This 85-Year-Old Guy Just Crushed a Marathon In Under 4 Hours 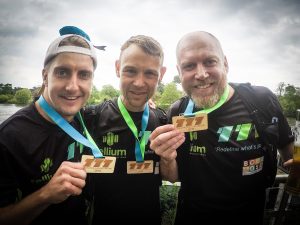 The Bokomoso Education Trust is a South African charity that is deeply involved in providing education for underprivileged children. Over the 2 years the Run77 members have managed to put two children through their schooling.

You can like the Run777 Facebook page, to see what they are planning for 2020 and if you’re feeling inspired, you can join them. And you can get involved with the Bokomoso Education Trust, by sponsoring a child or just donating what you can.

Check out the video of this year’s run below: