Walk Your Way To A Stronger Core

Loaded carries boost your performance and core strength. So why aren’t you doing them?

Dan John discovered loaded carries by accident. It was 2001, and the strength coach was sidelined by injury. So he did farmer’s walks because he wanted to feel like he was still training. But when he recovered, a funny thing happened: “I looked and performed better.” Soon John was hitting strength and discus-throwing numbers he hadn’t seen since his athlete days at university. Loaded carries had a convert, and John went on to popularise them in the fitness world.

These exercises present a serious challenge for the core muscles, according to research by Stuart McGill of the University of Waterloo. A stronger, tighter core gives your arms and legs a more powerful base for running fast, throwing hard and performing heavy lifts. The moves also rock your lats while improving your grip strength and shoulder stability. The benefits aren’t limited to individual muscles. “Loaded carries build work capacity,” John says, so you can do more gym work and do it better.

There are plenty of ways to build capacity, but you won’t find one that’s safer. “It’s really hard to hurt yourself when you’re walking around,” he says. Do carries at any point in your workout – they’re especially great at the end, when you’re fatigued and your balance and coordination are hindered. But no matter when you do them, the payoff is the same: a bigger, stronger body that’s better at anything you ask it to do.

There are four types of carries, and each challenges your body in different ways, says exercise physiologist and competitive strongman Pat Davidson. Try all seven variations below. Do one every training session, making sure you’ve hit all four categories after four workouts. 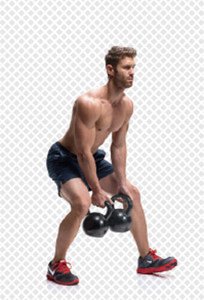 Farmer’s Walk – Hold a dumbbell, kettlebell, or barbell at each side. Grip tightly. (For loads exceeding 90kg, use a trap bar with weight plates.) 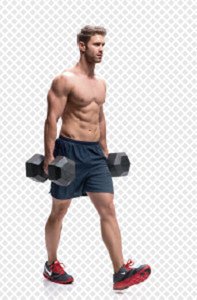 Zercher Walk – Hold a loaded barbell close to your chest in the crook of your elbows. Keep your core braced and your back straight throughout. 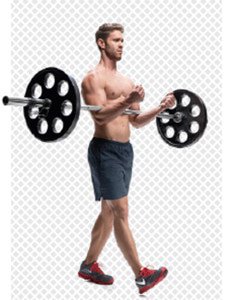 Overhead Walk – Hold one or two dumbbells or kettlebells (or a sandbag, barbell, or trusting girlfriend) directly over your shoulders. 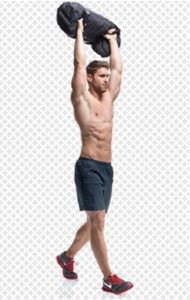 Suitcase Carry – Hold a weight – dumbbell, kettlebell, or an actual suitcase – on one side. Walk for the same distance or time with the other side loaded. 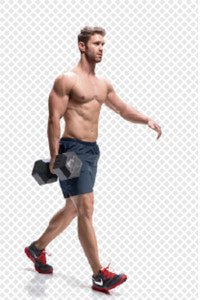 Bear Hug – Wrap both arms around a sandbag, weight plate, or large rock. Or hold a dumbbell or kettlebell just as you do for a goblet squat. 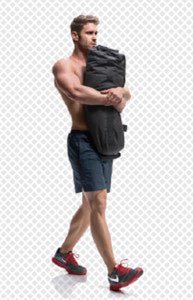 Bottoms Up – Hold a kettlebell upside down, your upper arm parallel to the floor and your elbow bent 90 degrees. Squeeze the handle tight! 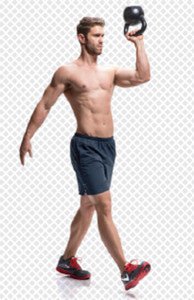 These exercises seem pretty straight-forward, but as with most exercises, they’re easy to cheat on. Ensure you have perfect form by following this tip:

Don’t look down! If you look at the floor when you do exercises that challenge your balance and stability, you’re doing it all wrong. “It’s a natural compensatory strategy, but it provides an undesirable sense of stability,” says Davidson. “It makes you shift your bodyweight forward, putting stress on your lower back.” So look ahead at a distant object when you do unstable exercises, such as loaded carries, single-leg squats, deadlifts and jumps. That, says Davidson, fixes your form and builds more strength.