Kit Harington packed on 12kgs of muscle in 5 weeks, and so can you

The seventh season of Game of Thrones is nearly here, which promises plenty of Jon Snow screentime. Actor Kit Harington’s physique might be buried under giant winter coats in Westeros, but beneath all that fur an armour, he is packing some serious muscle.

As the lead character Milo in the epic disaster film Pompeii, Harington spent five weeks putting on 12kg of very hard-won muscle. If being a bigger man is a huge task for you, his workout is the start of a new chapter. You’re only five weeks away from your big finale.

In Thrones, Harington’s body is almost constantly swathed in layers of coats and furs. That they weigh in at almost 10kg is not the point. It’s that underneath that mythical weighted vest stands his naturally slighter physique. “I’m not a two metre guy who can bulk up and just look like an absolute unit, a tank,” Harington said. “My body type has a tiny bit of stockiness to it but it’s really quite wiry, so for Pompeii that was the sort of look I had to go for – ‘prison fit’, like Robert De Niro in Cape Fear.”

If, like Harington, you’re a “hard gainer” – you train loads and eat as much as you can but simply can’t get bigger – you’re fighting against yourself. Your most powerful weapon is your fast metabolism, so use it to cut body fat and uncover definition, rather than trying to pack on huge slabs of muscle. It’s not only a shorter war, it’s one you can win.

It’s the heaviest graft first. Grab a bar with an overhand grip (A). Keep your back flat and arms straight as you lower (B). Pull the bar up the front of your legs to stand. End by drawing your shoulder blades together. Go on to the next move. 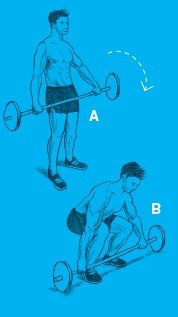 That hurt, didn’t it? This mobility move will fix that. Set the cable to the lowest notch. With the handle in your left hand, step back so your left foot is in front (A). Pull to your side, wrist twisting so your palm faces your body (B). Rest, then start the deadlift again. 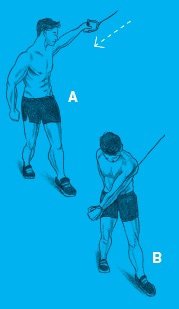 With the bar in the crook of your elbows, squeeze your hands into your chest to lock it in (A). Drop your hips as low as possible (B), then force your heels into the ground to push your chest up and your knees out. If you feel faintly heroic you’re doing it right. 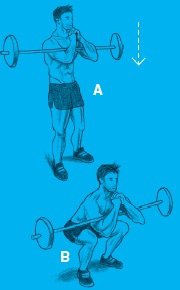 With feet just wider than shoulder width (A), sit in a deep squat position – hamstrings on your heels – for 30-40 seconds (B). It gets your body used to being in that deeper position and you’ll be able to go further when you load up the weight again. 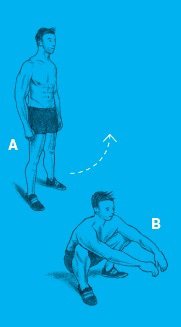 Don’t worry. This is nothing to do with underwear. Stand looking down the pull-up bar. Grab with one hand in front of the other, palms facing in (A). Pull up and left, right shoulder touching the bar (B). Repeat on the other side. If you are going commando, watch out for swinging. Move straight on. 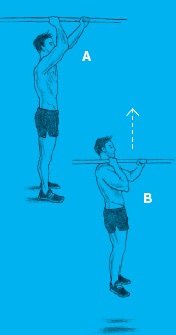 Bend over like a bentover row, holding a barbell at arm’s length. Row up slowly until your elbows and ears line up. Turn your wrists up to your ears (A) and do a shoulder press (B). This will help you squeeze your shoulder blades together for more pull-ups in the next set. Rest and repeat the pull-ups. 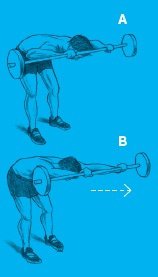 Jump up onto the dip bars and hover with your arms straight and your shoulders above your hands (A). Flex your knees and hips slightly. This is the easy bit. Bend your arms and flare your elbows out (B). When you feel a stretch in your chest or shoulders, push up. That’s the hard bit. Go straight on to your reward. 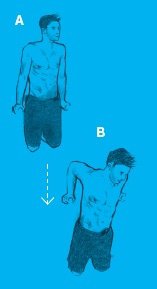 Sit on a Swiss ball (A), then roll forward so it rests in your back’s centre. With your arms in a crucifix position, let the weight gently stretch your chest (B). This elongates the muscle and prevents that “gym gorilla” look. Rest, then go back to the chest dips. 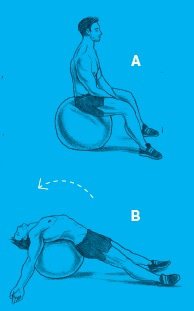 After all that, hit the deck. But hold a 5-10kg weight plate across your chest and bend your knees with your feet flat on the floor (A). Curl up slowly using your abs rather than momentum, until your back is 45 degrees off the floor (B). Reverse until you’re on your back again. 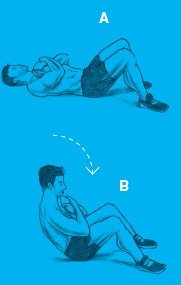 That done, put the weight down and roll onto your front. Put your palms on the ground close to the sides of your chest (A). Straighten your arms and push up your upper body, arching your back and stretching your abs (B). Your legs should stay rooted to the floor. Hold for five seconds and then relax before repeating. 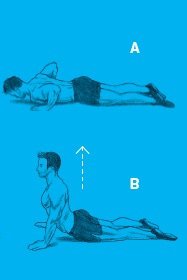 A final two-pronged attack on your chest means you leave the gym feeling bigger. Set an adjustable bench at a 45-degree incline and lie back with a pair of dumbbells held just above your shoulders (A). Push straight up (B). You’re only one move away from victory. Unfortunately this next one’s a killer. 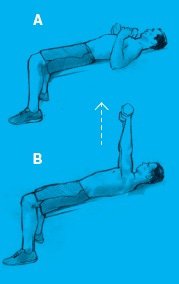 Sounds simple but doing as many reps as you can both stretches out the chest muscles and adds an extra strength-building set to the end of your workout. Make sure your shoulders are over your arms (A) and then sink as low as possible (B) before pushing back up. It hurts, but you’ll feel far less sore in the morning. 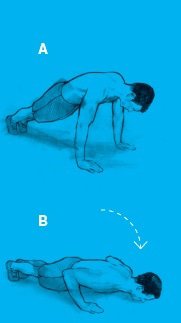 READ MORE ON: game of thrones