This One Snack Will Upgrade Your Cardio Gains

Serving in volleyball can be nerve-racking. Stop worrying: smashing a volleyball won’t help you score, but neither will babying it, new Spanish research reveals. A slow serve makes it easy for your opponent to react, while a fast one is too risky. Moderate velocity is the most effective. The perfect move? The “jump float” serve, says lead author Dr Bernat Buscà. As you run forward, toss the ball up in front of your hitting shoulder, jump and high-five the ball with a stiff wrist. 40

A 2011 Mintel survey revealed what men value most in a gym. That’s important, since the atmosphere can make or break your exercise resolve, says Dr Cedric Bryant, chief science officer for the American Council on Exercise. How does your gym measure up?

Third time isn’t always  a charm. Warming up for too long could slow your sprinting, a new Tunisian study reveals. Athletes who completed three sets of lower-body dynamic stretches, such as butt kicks and knee raises, sprinted more slowly than those who did one or two sets. More than 10 minutes of dynamic activity can cause acid build-up that slows you down, says study author Dr David Behm.

Yo-yo dieting (lose 5, gain 8, lose 3, repeat) isn’t only frustrating, but it may also cause changes in your brain that prime you to eat more when you’re stressed, a new rodent study from the University of Pennsylvania reports. But Danish scientists offer a human solution: Consume one-tenth of your daily kilojoules from protein to keep weight off. People on a diet moderately high in protein were twice as likely to keep losing weight as those who didn’t eat as much protein.

Your allergy pill may hamper your weight-loss efforts. A new study in the journal Obesity reveals that people (especially men) who take certain prescription antihistamines are 55% more likely to be overweight. Researchers think suppressing histamine, a neurotransmitter, may reduce fat metabolism and boost appetite.

Packed schedule? You still have time to lose weight. The latest proof: a 30-minute workout can jumpstart your weight loss, say researchers in Scotland. They found that overweight men who completed just six sprint sessions on stationary bikes over a two-week period lost more than a kilogram and improved their VO2 max by 10%. The scientists think people generally can lose more weight by ramping up workout intensity. Try it: the study participants warmed up for four minutes, and then did four to six 30-second sprints with a four-and-a-half minute recovery between sprints.

People who watch the most TV are not only heavier but more likely to have health problems, according to a study of 4 500 Scots. 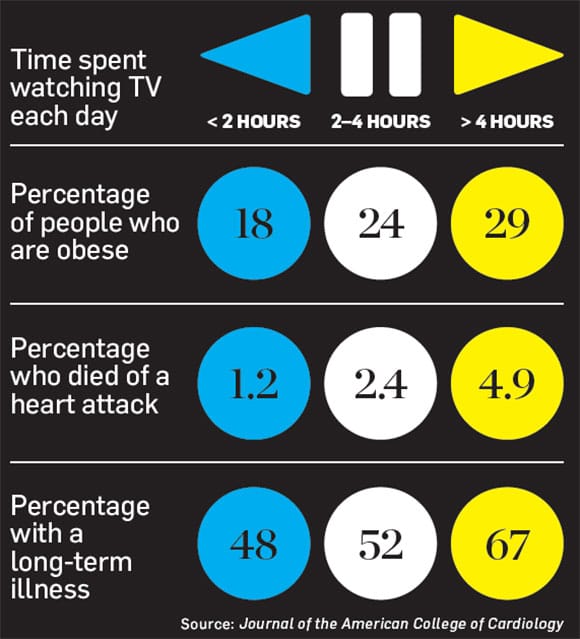