The Ultimate Guide To Mastering Mountain Biking: From Buying Bikes To Finding Trails

Power your strength, endurance and mental focus into high gear by riding dirt

It’s 2008 and Mike Posthumus is sitting in the weights room at the Sports Science Institute of South Africa, where he is completing his PhD in exercise science. He is about to perform his personal best bench press of 200kg. A loosehead prop by trade, he weighs 120kg of lean muscle – lifting big weights would help maintain his muscle mass and conditioning through an arduous season. If you walked up to him and said, Mike, let’s go for a ride, he would have laughed – and probably gone right back to lifting. Six years later, no one’s laughing.

It all happened in 2010, only days after Mike retired from semi-professional rugby. His mates were keen mountain bikers and managed to rope Mike into joining them on a ride one afternoon after work, the 33-year-old recalls. “They took me straight up the road and into Rhodes Memorial where we rode some single track,” he says – and everything changed. The thrill of skimming over rocks, bouncing over tree roots, and not knowing what was around the next corner had him hooked instantly. The next day Mike bought his first 26-inch hard tail.

This was a sport he could love. “It combined physical and mental challenges with technical skill, outdoor exploration and a social aspect,” says Posthumus, who now lives in Cape Town and regularly competes in races around the country. He has  captured victories in the The Swartberg100 Gran Fondo, a 170km race over and around the Swartberg mountains, and the 230km Transbaviaans, the toughest single-stage race in the world. But it was the camaraderie that clinched it. “Riding the trails with a posse gives you a similar high to the feeling of playing a team sport.” Ready for your own knobbly-tyred adventure? With warmer weather and longer daylight hours, summer is the best time of year for riding trails. Read on for training tips, gear and destinations to get the most out of every pedal stroke:

“There’s a lot of products out there, and while that is great for the new rider, it can also be confusing,” says Ned Overend, a multiple mountain bike world champion with three decades of experience. One of the easiest ways to make a sound choice is to spend some quality time at a local bike shop. Some shops offer demo bike programmes, Overend says. Test-riding different types of rigs is smart, because you have various tyre widths to choose from, as well as three major wheel sizes (26″, 27.5″ and 29″) and several suspension options. A good shop will match you to a bike that suits your goals, size and wallet. “Your relationship with the shop is even more important than the bike you’re buying,” says pro coach John Wakefield of Science to Sport. The right staff will make sure your bike fits you and is put together safely; they’ll also inspect your rig if you crash it.

Related: Is Your Bike Killing Your Boner?

You could buy a ton of expensive biking accessories, but you really only need a handful of essentials, says Overend: an extra inner tube, a tyre lever and a mini hand pump in case of a flat. Practice changing a tyre at home so you don’t end up panicking on a ride. One shortcut used by some riders is Geax Pitstop tyre sealant (R225, evobikes.co.za). It fits easily in a saddlebag and can keep a puncture repaired for as long as seven months. For your maiden ride, go with simple flat pedals instead of the kind with hardware for clipping your bike shoes into. Flat pedals boost your confidence because they make bailing easier if you find yourself in a jam. If you want to splurge on something, invest in a dropper seat post, which lets you raise or lower the seat with the push of a handlebar lever. Dropping your seat on downhills keeps you safer by lowering your centre of gravity, says Dan Dobinson, owner of iRide Africa, which offers mountain bike skills courses and cycling tours. That reduces the risk of launching yourself over the handlebar in technical sections – also known as the dreaded “endo.”

Related: How To Supercharge Your Cycling Endurance With Weights

You don’t need to launch off an 8-metre ridge or hop off 3-metre boulders to call yourself a mountain biker. “When you’re new at this, you’re sup-posed to be learning and growing into the sport,” Wakefield says. Ask your shop about good beginner terrain and trails in your area. A few riding tips to start: you’re in the correct gear when your pedal stroke is smooth and gives you constant, steady power – no bouncing or jerking, no slack in your chain, no struggling to turn over the pedals. To brake, squeeze both sides softly and equally. One finger is enough to engage today’s high-tech disc brakes, which will buck you off if you squeeze them full-force. 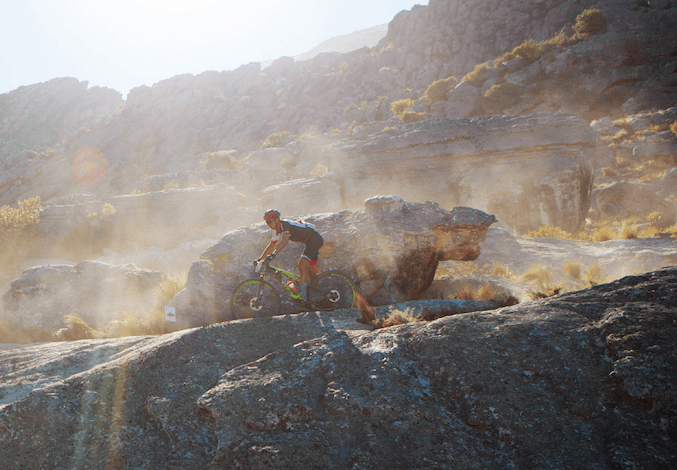 As you approach obstacles like rocks and roots, use your arms and legs as shock absorbers, says Dobinson. Don’t freeze up or slow down. Think light hands, heavy feet, bum off the saddle – like a surfer crouched to absorb the force of a wave. Maintaining momentum makes it easier to roll up and over obstacles. Over time you should master the track stand, says Overend.

That’s the ability to keep your balance while stopped or at very slow speeds rather than using forward momentum to stay upright. This skill helps you tackle features like tight turns and switchbacks that need to be negotiated slowly. So in your driveway, try to stay on your bike as long as you can without rolling forward or fall- ing off. Do this: stand up, rotate the cranks to horizontal, and turn the handlebar 45-degrees, keeping one finger on each brake and holding pressure on the forward pedal. “Stay loose and calm and focus on a point two metres ahead,” Overend says. “It’s really simple, but it really helps. Work up to 60 seconds.”

Related: Yes, Cycling Can Help Your Running – If You Do It Backwards

“There are two elements to climbing: balance and traction,” Overend says. Distribute more weight on your back wheel so it doesn’t spin out and enough on your front so you have enough grip to steer – a 60/40 split is ideal. To improve traction, says Dobinson, “lower your chest towards the handlebar, shift your weight slightly back in the saddle and concentrate on a smooth, consistent pedal stroke.” Many beginners fail to downshift early enough at the bottom of a climb and end up with too much chain tension, making gear changes difficult. That’s why it’s better to undergear on long hills. Pick a slightly easier gear than you think you need; that way your cadence or pedal rate will be faster and you won’t exhaust your muscles with overly heavy strokes up a long hill. On shorter, steeper climbs, just stand up and crank hard. That costs more energy, but it gives you the most leverage. In both scenarios, ride with the pedal centred in the middle of your foot, which puts the least stress on your Achilles and calves and provides more direct power from your body’s big generator – your glutes.

White-knuckle, roller-coaster descents are the most fun part of mountain biking – and the most dangerous. Shift your weight back in the saddle for better control and more speed. You’re too far back if you’re hanging on with your fingers and losing pressure on your palms; that pressure helps you maintain steering and braking power. If you have a dropper post, good. “If your seat restricts your hip’s movement, it compromises your ability to stay balanced as you bomb downhill,” says Wakefield. To scrub speed, “squeeze both brakes evenly and at the same time with two fingers,” Wakefield says.

“Find a local club based from a mountain bike park and join some group rides,” Dobinson suggests. Try Wolwespruit in Pretoria, Tygerberg MTB club in Cape Town and Giba George in Durbs. The locals can point you to the best trails for your ability – an invaluable service, since there’s no universal system for ranking trails by difficulty. Also, says Posthumus, riding with others makes it easier to push yourself and learn. “You’ll see riders tackle an obstacle or blast downhill and it’ll give you confidence.” Eventually you’ll experience what’s kept Posthumus addicted to dirt riding for more than a decade. “Improving,” he says, “never gets old.”