The Best Cardio Workout for People Who Hate Cardio

Cardio haters, rejoice. The 4-minute calorie-torching wonder known as the Tabata protocol lives up to the hype, according to an Auburn University study.

Participants performed eight 20-second rounds of jump squats separated by only 10 seconds of rest. Each round was done at an all-out pace with the participants working as hard as possible from start to finish. While they burned an average of 13.4 calories  per minute during the workout, they also doubled their post-exercise metabolic rate for at least 30 minutes afterward.

“You would have to do five times the amount of moderate-intensity exercise—like power walking or light jogging—to burn the same amount of calories as you did in just 4 minutes,” says study author Michele Olson, Ph.D., FACSM. “Even more if you want to achieve the after-burn benefits, too.”

Since it requires energy to help the body recover post-workout, the higher the intensity of your sweat session, the longer your metabolism stays elevated afterward, according to Olson. In this case, the participants worked up to 95 percent of their maximum capacity (read: as hard as they could go), so it took a long time for their bodies to return to normal, even though they were resting.
How To Do It:
To do a jump squat place your fingers on the back of your head and pull your elbows back so they’re in line with your body. Dip your knees, and then explosively jump as high as you can. When you land, immediately squat and jump again. 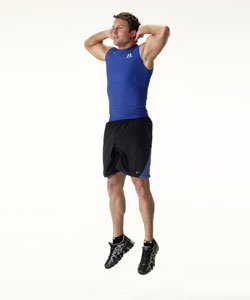 Do 8 20 second rounds of jumps squats with only 10 seconds of rest in between.