His real explosive power was built under the iron.

Cameron van der Burgh squats heavy, and often. Aim for explosive movements to bolster the size of your quads and glutes.

He bangs out two reps of 120kg squats, and then immediately moves to another bar – racked with half that – and fires off another six. “I like to overload my nervous system,” says Van der Burgh. “That way, when you lower the weight, your muscles are overcompensating and the last reps feel like nothing.”

For the Olympic swimmer, who has dominated the pool ever since winning gold and setting a new world record in the 100m breaststroke at the 2012 Summer Games, finding new ways to “hack” his routine is part of the reason he keeps coming back to the gym.

Related: 9 Reasons To Pick Up The December Issue

Sure, he’s still lifting heavy: “But I’m tricking my mind. I’m keeping that explosive movement, and I’m getting more out of it.” Van der Burgh thrives on competition. He ropes in a training partner when he’s at the gym, and turns every move into a gruelling face-off. And when there’s no-one else around? “I’m racing against myself. I’m keeping track of the stats, and trying to go one set, one rep or one kilogram further than I did last time.” 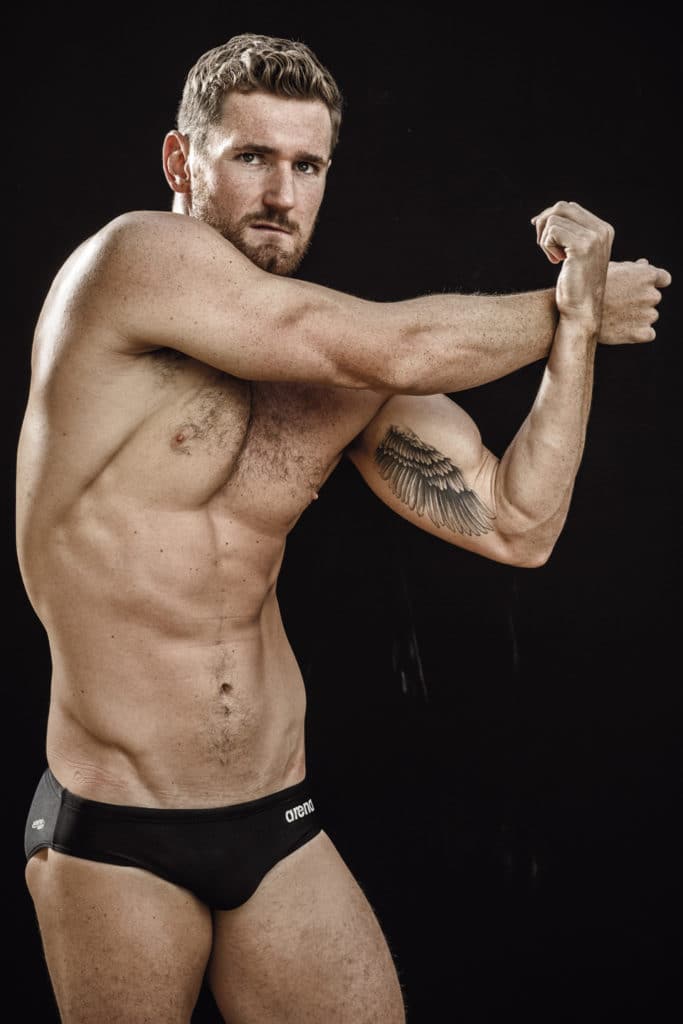 Gym time is a crucial part of the swimmer’s routine. While he builds endurance and refines his movements in the pool, the real explosive power – you know, the kind that takes you to the front of the pack – is built under the iron. When it comes to swimming, your legs are your engine, explains Van der Burgh. “Think of your body as a speedboat. All the power comes from the motor at the back.”

Being able to tap into pure explosive energy allows you jump into the lead straight off the block; and add to that lead, or settle the difference, with a nitrous boost push against the wall on the turn.

Van der Burgh rattles off the moves he’ll complete in his average session: squats, backwards lunges, squat jumps, vertical jumps, and even high-jump-related moves. And this explosive energy isn’t just useful in the water. “Any guy can benefit from this,” he says. “These limbs carry you around, and you’ll reap the rewards of strengthening them.”

The guy who leads the charge in the weekly park run isn’t just training for distance. Having explosive energy on tap means he’s powering up every incline easily. Or, on an even shallower level: a barrelled chest loses its charm when you’re sneaking around on a pair of chicken legs. “Proportions, man,” laughs Van der Burgh. But getting the edge on your workouts isn’t just about mentality and physicality. There’s a fair amount of maths going on there too.

Van der Burgh likes to crunch numbers. On the one hand, these digits help fuel his natural competitive spirit, letting him square off against old stats. On the other, they also show him that the hard work in the gym is paying dividends in the form of small increases.

“That’s the sort of thing that keeps you motivated even on the bad days,” he says. And there are plenty of those, for pro athletes and weekend warriors alike. It’s at times like those that it’s important to focus on the big picture, the reason you’re there.

“I try not sweat the small stuff,” he says. “For so many guys, they go in with big goals; and then have a couple of rough days in a row, and feel like calling it quits. Just remember, that first month is the hardest, because the results don’t come easy. But after that, it’s exponential. Whether you’re looking to gain strength or just improve your physique.”

Related: Here’ Why Lifting Weights Is The Most Effective Way To Lose Weight