Forget the 9-to-5 desk job – Reon van der Watt jumps from buildings, gets beaten up, and is set on fire. Use his lessons to disrupt your plateaus and end boring training sessions. 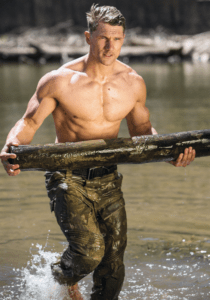 “It started at a family dinner. A friend told this amazing story about when he was in the army, and they were shooting a film close to his base. The production was looking for a few soldiers to star in an action sequence. All they needed to do was to walk through the veld with a blood bag, carrying a small explosive charge on it, strapped to their bodies. When the blood bag (called a squib) exploded, they had to react, and give the director a ‘good death’.”

Then and there, at the ripe old age of six, Van der Watt knew what he wanted to do – that thing, whatever it was, was going to be his job. He had his whole life planned out. But then he grew up. And his childhood dream was shelved along with a towering pile of textbooks, as he worked towards getting a degree in civil engineering.

Related: Brooks Koepka Is One of the Fittest Guys in Golf – Here’s How He Does It

In 2011, Van der Watt moved from his home town of Knysna to Cape Town, to continue his studies – or so he told everyone. But shortly after arriving he contacted a stunt company, managed to get an audition, and landed a small stunt part in a film.

He jumped into his new career with the same confidence and fearlessness he’d shown jumping from his first building. “My first day on set was spectacular! After two days, I gave up my studies to pursue stunt work full-time.”

Seven years later, and Van der Watt has racked up some serious Hollywood time, as a stunt double for such familiar faces as Chris Evans, Dolph Lundgreen, Philip Winchester, Tom Hopper and Alan Ritchson (all of whom have been Men’s Health cover guys).

Related: 6 Life Lessons You Can Learn From Successful A**holes

His leap from studying to stuntman may sound easy, but it’s not for the faint-of-heart – or the faint-of-heights. Van der Watt has an extremely well-thought-out exercise routine, and follows a raw and organic diet. 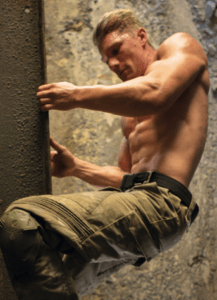 “Making sure you get the necessary nutrients in your body makes a big difference. When your immune system’s slightly down, the risk of injury is greater,” he warns.

The list of training techniques Van der Watt uses is almost as long as his list of film credits. He does functional exercises, bodyweight training, and of course cardio, because he needs to be fit on set for 12-hour days of fighting, falling, jumping and running. “Parkour and gymnastics-style training make a good base for flipping and tricking,” he says. And then there are the three Ms: martial arts, motocross skills and military basics training.

Which is different to the training he sees most men doing when he hits the gym every day. “For stunt performers, it’s all about functionality – big arms don’t help us at all. Lifting weights is all about aesthetics.” Van der Watt thinks the gym bro’s need to give up the gains and consider the “F” word; functional training. “They should incorporate a more natural way of movement into their workouts, and functional moves like jumping, swinging, pulling and crawling.”

For us guys? Functional training means adapting your body for stuntman strength, without the severe sprains and injuries. Take the leap: it’s time to train like a movie star.

Related: This Guy Transformed His Body By Keeping His Workouts Interesting