Skinny Guys, Bulk Up Now! Just Like This Guy.

I wobbled in front of the bar for a few precarious seconds. The dizzy intoxication was familiar, but the bar was different. There were no craft beers here, nor precious drops of whiskey. Just a length of immoveable steel and a sober man learning a stone cold lesson in humility.

Up until the first time I stepped into the Compound, I had spent a lifetime skirting sheepishly past the iron elements of my local gym. Those dumbbells, barbells and kettlebells were just alarm bells associated with intimidating exercises that sounded more likely to kill me than make me stronger.

Deadlifts? Skull crushers? Forget it, I’ll be over here in my safe space with a sangria. But curiosity got the best of me. You know the kind that pushes people to go shark cage diving, spelunking or crossing a South African intersection. And it wasn’t just curiosity; it was more than that. It was this inherent need most humans feel, that we want to be strong, we want to be powerful. We want to transcend a lifestyle too easily and efficiently spent with our asses glued to chairs and our eyes glued to screens. 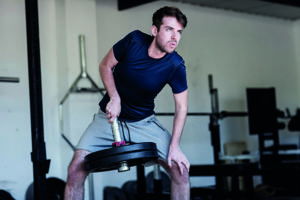 This isn’t a tale of miraculous abs, surprise swole or prolific pecs. This is how a scrawny guy who couldn’t lift anything heavier than the light-end of a couch, pushed himself – through nausea, sweat and the bitter taste of pea protein – to hold his own.

The challenge: go from never having lifted to lifting my bodyweight in three of the main compound lifts. That’s a 71kg deadlift, squat and bench. The start pointing: zero. The cut-off: 12 weeks or go home. The kicker: I’m a homegrown, flannel-wearing, barely-bearded vegan.

“Bloody Vegans”
David Cross didn’t hide his hesitancy after reviewing my resume: which consisted of a one-week food diary and a post-it note of all the exercise I’d done in the last 10 years. Cross is a British strength and conditioning coach who tortures South Africans for sport, and has a long track record of transforming floppy specimens into functional (and strong) humans. But I was an outlier, a floppier specimen than most. While I had potential for “newbie gains”, he admits – I was subsisting entirely on carbs and fatty chocolate (“You vegans and your bloody food”). The closest I came to “hitting my macros” was on a particularly dire camping trip where all we had to eat were cans of beans. 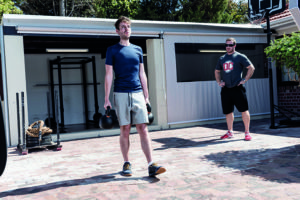 “I can train you, but your diet needs a desperate overhaul,” he told me. “Eighty percent of how you look is down to what you eat; the rest of it is the workout.” Here’s the best part of having a trainer who is 110kg heavy and could throw you further than the average kettlebell: it’s very easy to listen. Add in an accent straight out of the SAS and I went from bad routines to regimented health over the course of a single sit-down. Step 1: I calculated my macros. Step 2: I downloaded and installed MyFitnessPal (available for free on both Android and iOS) and diligently began logging my meals and assigning plate real estate based on my intake. Step 3: I wasn’t at all prepared for Step 4.

“Zero Mobility”
When you first start lifting, the temptation to give up is strong. I like to say that when I put my mind to something I generally become obsessive until I see it through. But in the aftermath of my first session I was dizzy with a dose of reality that was crammed down my throat. I didn’t just feel weak; I felt weak in a myriad of new ways I didn’t think were possible. Lying in the foetal position on my couch I had flashbacks to my clumsy attempts at deadlifting, or my shaking false starts during a single set of bodyweight squats that left me sapped and defeated. And the entire time I felt David’s patience fraying. Now, he laughs when I ask him about those early days. “You were in a bad way,” he says.“But it’s not abnormal. It’s too normal.”

When we’re inactive we don’t just waste away. We condition our bodies to our routine. Mine? I would run, begrudgingly, and then spend a lot of time finding inanimate objects to cradle my flat, white ass. The result: my muscles were tight, my flexibility was shot, and movements required to nail a deadlift – essentially child’s play for the average toddler – were so far beyond my capabilities I felt like I’d walked into a quantum computing class instead of a gym.

Not only does David make all his client’s spend the first five or ten minutes of a session limbering up with a series of stretches (The Limber 11 is a good place to start), but he had me isolate muscle groups and go to town with foam roller and tennis ball to loosen up the fibres in my free time.
In his words: proper form requires mobility. And proper form is essential not only if you want to bolster the benefits of every lift, but to avoid injury that may sideline you for months or even worse, cause long-lasting damage that will only rear its ugly head as you get older. I went there expecting to pack on plates like a sumo wrestler at a buffet and quickly realised this wasn’t a Rocky montage, this was a process. A tough, sweaty process.

From “Floppy Cock” to “Committed”
A few weeks in and David had upgraded me from “floppy cock” status. (His words, not mine.) Movements were making sense, and my deadlift and squat form no longer resembled a gyrating beanpole. I was adjusting to my socialist meal plan (eating anything as long as it fits my macros), which involved supplementing every meal with a gross dose of plant protein powder. But I already noticed small changes. I was now thinking about how I moved, not just when I was in the squat rack or carrying kettlebells around David’s garden, but when I walked. My posture was better, my grip strength had ramped up tremendously – there wasn’t a jar lid that could stand in my way anymore – and I just felt healthier.

I was also approaching (most) of my sessions with excitement instead of dread. In a Facebook post David writes: “I really enjoy how Kieran turns up for every session on time, ready to go no matter how his day has gone. Committed.” I’m including this for a few reasons. First, to balance out the self-deprecation. Second, it’s the nicest thing David has ever said to me. And finally, it taps into one of the most important lessons I learnt: just show up.

I reaped the biggest rewards from sessions I wanted to skip so badly I had a novel-length list of excuses drafted and ready to send to my towering coach. But then I’d remember the time I half-assed putting up new guttering and was almost knocked unconscious as it crashed onto my head during a particularly rainy day. Then there was the reminder that the clock was ticking. If I couldn’t lift my bodyweight in at least one of the lifts after those 12 weeks had expired, it would feel a lot worse knowing I could’ve showed up for one more session.

“My favourite clients are the ones who show up every time, the ones who don’t complain, who get shit done and go home,” says David. Do that, and you’ll be happier for it. 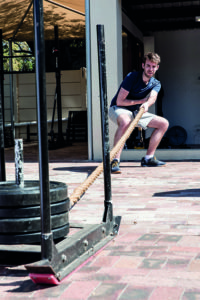 “Judgement Day”
I’d made steady gains throughout my training, but I realised as I woke up during the final week that three months had flown by. Two weeks earlier I’d lifted my bodyweight during a set of deadlifts and it was easy. But my squat was still trailing at 55kg (15kg shy of my goal) and my bench press was in no man’s land.

My final test wasn’t a powerlifting competition. There wasn’t a stage, just David standing there asking if I was going to “cock around in front of the bar forever”. There was a fortunate by-product. I was being studious with my meals, carefully timing my carb intake and measuring out my protein portions. I was going to bed earlier and waking up from chaotic dreams of me practicing compound lifts in some sort of Cross-ruled dystopia. When you’re orbiting a goal, the preparations fall into place. Training isn’t a thought process – it’s instinct. Meals are regimented, and most importantly, you have an undeniable and satisfying sense of purpose.

I showed up on my test days ready to push myself even if it broke me. The result: in 12 weeks of training for an hour, just three to four times per week, I had gone from absolute zero to deadlifting 90kg, squatting 70 and benching 45. It wasn’t the perfect score I was hoping for, but it was damn satisfying, especially that final squat where I tapped into my reserves to hit my target.

For a guy who had never lifted weights, it seemed impossible that I might just hold my own in a space I had avoided for my entire life. What seemed even more unlikely was me returning to the weights room once my challenge was done. But now I can’t imagine going through a week without the sweat, without the pain – without the progress. It has become a cornerstone to my routine that hasn’t just boosted my strength and my confidence, it has made the stresses of everyday life seem trivial in comparison to suffering during my sessions.

Sure, I don’t have washboard abs (yet) or front-row seats to the gun show (yet), but I’m stronger (a lot stronger) and I feel that newfound power everyday, whether I’m sitting down or moving more. At the end of the day, it’s a big reward that’s easily worth the four hours of lost couch time every week.