NO CONTEST: South Africa Has The World’s Best Running Trails – Here’s How To Find Them

Four races in the course of a month, consisting of short and longer distances, this is a great introduction to what trail running is all about, without the risk of falling off a cliff if it all goes wrong. The first race takes you 12km along the Hennops River, over largely easy-running terrain of established tracks; the second, at Segwati Game Ranch, is the same distance but steps it up a notch to include steeper ascents. A week later at B’Sorah Tented Camp you’re faced with just over 13km of 80% off-road conditions, and it all ends at Leeuwenkloof: 14km of technical terrain at a runnable gradient, so you can make up some time with a fast finish. Top trail runner AJ Calitz says it’s a lot like a cross-country course, and a fun way to spend your Saturday.

To get a medal, complete all four. Consider this your warm-up. trailseries.co.za

SA’s premier marathon trail race takes place along the Otter Trail – you might know it as that fiveday hike along the coast between Nature’s Valley and Stormsriver. But walking is one thing…

Calitz calls this the one of the most gruelling but beautiful trails in the world: “Expect serious steps, highly technical running and views that are second to none”. This is a one-way race that alternates between two directions, known as the Otter and the Retto. Most finishers agree that the latter is hardest, involving a tricky negotiation of a treacherous waterfall section between Ngubu Hit and Stormsriver Rest Camp on very tired legs.

There’s a 5K prologue to get you accustomed to the technicality of the route, and on the day itself you’ll cross four rivers, the first of which involves a swim. You can look forward to 11 significantly steep climbs, with a total elevation gain of 2 500m: enough to slow the strongest trail runners to a brisk hike. This is no ordinary 42km – there has been only one sub-four hour time set in its six-year history. Your cut-off is eight hours; after that, your chances of crossing the raging Bloukrans River are slim. theotter.co.za 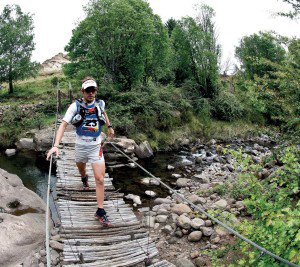 This three-day stage race through the Golden Gate Highlands National Park takes you on a tour of some of the country’s most restricted and isolated reserves, with names like Little Serengeti and Cathedral Caves. You’ll pass ancient rock paintings and deal with severe altitudes, on the hunt for the rare Bearded Vulture. Highlights from the first day’s trekking include two serious single-track climbs, known as Hartbreek Kop and the Brandwag Mountain, and on Day 2 be prepared to use your hands while climbing – the max slope hits 35% – but it’s Day 3 that you’ll really feel the burn: the first 7km are all upwards, a total gain of 1 590m. Take it from Calitz: prepare for some serious climbing, straight up, at altitude.

Due to the delicate nature of the ecosystems you’ll be visiting the race is restricted to a special few hundred people, so book now. wildseries.co.za

Three races of increasing difficulty over what must rank as South Africa’s toughest mountain: its sheer variety of terrain makes this a true challenge for the most hardened mountain goat. Calitz says the weather can play its part, and you can experience all four seasons up close and personal at the top of the world – from sub-zero temps at the start to over 30s in the middle of the day. “This is one of the more accessible races, thanks to its three distances. But don’t underestimate this mountain. She bites.” Whichever distances you aim for, expect no shortage of hills.

The 35km option comes with 1 800m of elevation gain, with two major climbs at either end and a massive, very technical descent along Newlands Contour right in the middle. Look out for a steep climb known as The 400 Stairs, and of course Platteklip Gorge: a notorious vertical ascent with gradients upwards of 35 degrees. Two aid stations make this short route a feasible option for more inexperienced runners, but be warned: in the first 7km you’ll have climbed 900m. The 65km Ultra includes a final 10km stretch with two serious climbs directly into the vicious Cape Doctor headwind – one to get up onto the Block House, and the other straight up Devil’s Peak – but it’s on the 100km route that you’ll start wondering if it ever ends. Nine aid stations, a recently extended cut– off of 17 hours, a 4am starting time: if you can make it through this, you can make it through anything. ultratrailcapetown.com

“The beast!” says Calitz. “Self-navigated, self supported, 100km at altitude with no defined trails?

Running across the Dragon’s Back is an experience in true mountain solitude, and one of South Africa’s greatest trail pleasures.” The SkyRun 100km offers a unique challenge: extreme endurance athletes take on the remote Witteberg Mountain Range with nothing more than a map or compass and a back containing enough food, water and safety gear to survive – all at an average of 2 500m above sea level. As far as terrain is concerned, this race is more a
combination of energy-sapping hiking trail and quad-destroying mountain running than your average Jeep track.

And that Dragon’s Back Calitz mentioned awaits about 20km in: a ridge line three metres wide with nothing but steep drops on either side, which offers incredible 360-degre views. Not for anyone who suffers from vertigo. About halfway you’ll come across a compulsory stop at Balloch Cave, where you’ll undergo a quick medical check-up – then it’s over the almost-vertical Balloch Wall. Don’t be surprised if it suddenly gets dark – you’ll be running into nightfall – and on your way home you’ll have to navigate a sharp, technical descent on fatigued legs. “Proceed with caution,” says Calitz. “Skyrun is very, very, very hard.” skyrun.co.za