How Pro SA Boxer Kevin Lerena Gets Into Fighting Form

If your workout isn’t kicking your ass, you aren’t hitting hard enough. Pro brawler Kevin Lerena shows you how to fight back.

Kevin Lerena has punched and kicked his way to a phenomenal physique… Call it the Art of Bruising or the Hurt Business – boxing and mixed martial arts are known for chewing up and spitting out contenders. You need an indomitable fighting spirit to go the distance but in the ring, it’s technique, skill and discipline that matter just as much – not just to win the match, but to keep you from getting clocked or concussed on the path to glory. And that’s where the truly elite fighters come into their own: they’re athletes first and fighting machines second.

They train six days a week and rest for one, even when they’re not working towards a specific fight. Every action, every routine is a choice – designed to condition, build fitness, develop stamina, strengthen the mind and to groove the movement so perfectly that, when they have to deliver exactly the same performance under pressure, their body is able to do it without hesitating. 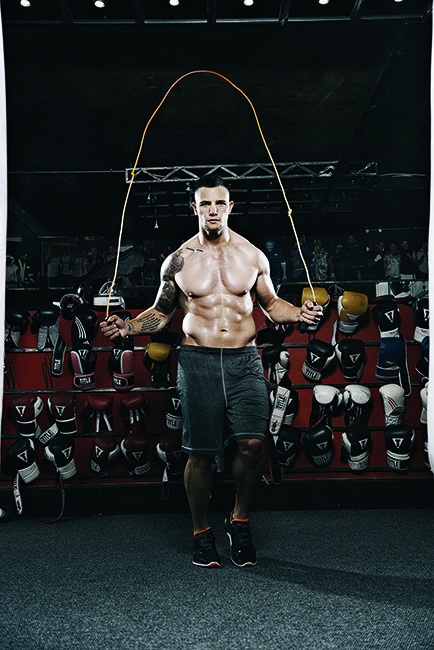 Kevin Lerena turned pro in 2011, at the age of 19. Now just a few months shy of his 25th birthday, the fresh-faced boxer is one of the world’s top cruiserweights. He’s ranked second in the world by the WBO, and 11th and 13th in his weight division by the WBC and WBA, respectively.

Lerena has won 17 of his 18 professional bouts (his only loss, to Johnny Muller back in 2014, still stings, despite a convincing victory over Muller 17 months later). Most of those fights have gone the distance.

“When you become a pro, you’re not there for three minutes of fame. You’re on your feet for 12 rounds,” Lerena says. “And that means you have to train for 24.” The first four years after going pro, Lerena says, were about paying his dues. “People think you turn pro and you’re going to make money, but it doesn’t work like that,” he says.

Related: How Rami ‘Pitbull’ Mungul Made It As A Pro Kickboxer

Now, as he enters his seventh year as a professional, he’s facing a new challenge: a winning streak. “Winning is very difficult,” says Lerena’s coach and trainer Peter Smith, of Smith’s Gym. “Winning is fatiguing – mentally, physically. When you get to the top, that’s when the real training starts.” Smith says Lerena has “a lot of strengths. He’s become a well-rounded fighter. He’s athletic, a quick learner. He takes in information really well and he sticks to a plan. Some guys don’t have that discipline.”

At this stage of the game, it’s really all about discipline and routine – even a great technique is only as good as what you’re able to produce under fight conditions. “I always seek perfection in my fighters,” Smith says. “I’ll never get it, but at times I am pleased with their performance.”

Smith acknowledges that a training routine can become monotonous. “You keep rehearsing the same moves. The guys will say, ‘But we’ve already done this’, and I’ll say: but it’s not good enough. It must become almost subconscious. Nobody walks into gym a world champion. There are guys with great ability, who are so talented. But sometimes the less-talented come through because of their work ethic, and their will to become great. You combine training and teaching with ability, willpower and dedication. You can’t beat dedication.”

Lerena trains three times a day, six days a week. He only takes Sundays off. “It can be hard to motivate yourself when there’s no actual fight,” he says [Smith and Lerena are waiting to hear about a possible fight later this year, in the US], “but I’m in a good rhythm now. I’m a lot more disciplined and focused than I was when I started training. Now I’ve got it down to a T. I come to gym. I work hard. I pay attention to the finer details – to improve as an athlete.”

Lerena doesn’t have what you’d call a stereotypical boxer’s body. He’s a tattooed triangle, with big lats and a big chest. “That’s just my genetic make-up. I don’t do anything to build muscle – all my training is functional,” he explains. “I’ve got to work extra hard to balance it out.

Naturally my upper body and arm strength is a lot higher, so there are some benefits,” he says, but it has come at the cost of other areas, where he has had to work harder. Because he’s very “front heavy”, Lerena has had chronic shoulder injuries, which he has successfully rehabilitated working with a biokineticist and strengthening all the muscles around the shoulder area. “You’ve got to find the balance: to be both super-fit and strong,” he says.

Lerena does lift heavy weights in one of his daily sessions, but focuses on building performance, training explosive fast-twitch muscle fibre response, rather than brawn, in all the others. “I’m not looking to look good on the beach,” he says. “I’m looking to perform at my best. For me, performance is everything. If your performance is up there, everything else will fall into place.”

Related: How To Conquer UFC And EFC Like Don ‘Magic Man’ Madge