How To Deal With DOMS: Pro Tips From The Super Rugby Players

Monday means its time to recharge and look after possible injuries

Rugby, as Tana Umaga once said, isn’t tiddlywinks. Even with their high level of conditioning, most players experience delayed-onset muscle soreness, and it’s at its worst between 48 and 72 hours after a game. Jesse and Sergeal share a favourite means of fighting DOMS: regular massages, and four or five intervals between ice baths and time in the jacuzzi, of three minutes each.

Related: Here’s Why You Should Get A Massage If You’re Struggling With These 8 Health Issues

While pain in the aftermath of a high-impact rugby match is to be expected, not all discomfort points to injury, says Bulls’ team doctor, Herman Rossouw. “Delayed-onset muscle soreness is most prevalent after a sudden, unusual exercise, where a player stretches or lengthens his muscle fibres in a way he’s not accustomed to. Trauma is different – most micro-damage to muscles is from contusion injuries, or overstretch.”

Rossouw says communicating with players might be the best way to distinguish between stiffness and something more serious. “We make use of a scale questionnaire that each player completes each day before the start of training,” he says. “A player will rate his experience on how stiff he feels, and we’ll use those values to decide on his load during the week.” 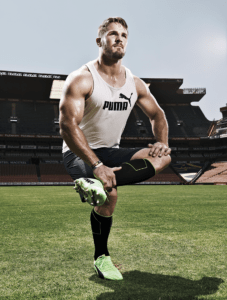 Active recovery really helps me flush out stiffness after a game – maybe a 15-minute job, or if the legs are really buggered, a light spinning session. – Jaco Kriel

Training while stiff could set you back, says Rossouw. “Besides the discomfort of training with a sore muscle group, there is a risk of aggravating the stiffness and progressing to a strain. Some muscle groups are more at risk, such as the quads and hamstrings, and we tend to be more aggressive with our decision-making regarding these muscle groups.”

This is why, no matter how much he’s hurting, Jesse stays away from painkillers and anti-inflammatories. “They can affect blood-clotting,” he says, “and this can actually increase bleeding within damaged tissue, and lead to swelling – and that means more time on the sidelines.”

Rossouw’s top tip to alleviate pain in a way that also prevents injury: pre-hab. “We hold a session each day where we manage players’ specific concerns by stretching, foam rolling, muscle activation or manual therapy.”

In a 2009 study published in the SA Medical Journal, researchers followed 14 teams through the then-Super 14 tournament, and found players suffered almost 100 time-loss injuries every 1 000 recorded player hours. The majority of those, of course, occurred in the tackle. These are the three most common tackle-related injuries, and how to treat them.

Related: Inside The Super Rugby Camp: How The Players Recover Between Games

Concussion
Jesse says Bulls players undergo a baseline concussion test, and all subsequent tests are measured against those results. A player who shows signs of being concussed – such as persistent headaches, nausea or vision problems – will be sent to see a doctor immediately. It’s important to remember that a concussion is a form of brain damage, and the most appropriate treatment involves rest, pure and simple: players are directed to avoid both physical exercise and mental exertion, too, be it playing videos games or binge-watching TV.

Cervical Stinger
Proper tackling form is naturally traumatic: the act of putting your shoulder in the way of a massive guy, running at speed, puts the bundled nerve supply (known as the brachial plexus) along your neck at risk. Do that often enough, and you’ll experience a stinging or burning sensation down the length of your arm and into your hand, as the nerves are slowly damaged. While those symptoms are usually temporary, prolonged damage can lead to days on the sidelines, as you wait to regain some kind of feeling in your arm.

Related: Got A Shoulder Injury? This Guy Will Show You How To Recover Without The Relapse

MCL Tear
Anybody who experiences a shoulder-first tackle directly into the front or side of the thigh is prone to suffering an MCL tear. The medial collateral ligament is located on the inside of your knee, and one of its functions is to prevent your knee from bending inward. A minor tear may require a day or two of rest, while a serious, Grade 3 tear can take up to eight weeks to heal. Treatment includes rest, icing the area and wearing a cast to restrict movement. Proper recovery is crucial: an MCL tear that is not allowed to heal can make the area susceptible to further injury.

Serious Mind Games
Whether you’re carrying the ball or trying to get it, concussion is the most common injury in the professional game. Super Rugby’s Pitch-Side Concussion Assessment includes these five questions. Get one wrong, and that’s game over.
1. What venue are we at today?
2. Which half is it now?
3. Who scored last in this match?
4. What team did you play last game?
5. Did your team win the last game?