How Would Your Fitness Compare To A Pro Rugby Player? These 4 Guys Were Trained & Treated at the Vodacom #TrainWithCheetahs Event

This article is sponsored by Vodacom Red.

To watch a game of rugby in a stadium is one thing, to meet a few players afterwards, maybe shake hands or get an autograph is a bonus, but to actually spend a whole day in the presence of these stars, up close and personal, to train with them, share jokes and to hang out afterwards, is something most guys never get to experience. This was the third event in a series of unique Red Rugby Rewards experiences in which the local Super Rugby franchises host Red clients as part of Vodacom’s rewards system for loyal and valued clients.

The lucky participants were transported to the Toyota Stadium where they were welcomed by Free State Cheetahs Managing Director, Harold Verster, and their four Cheetahs training partners, Reniel Hugo, Sergeal Petersen, William Small-Smith and Uzair Cassiem, as well as Cheetahs Strength and Conditioning coach Quintin Kruger.

Also there to meet them was Springbok speedster Cornal Hendricks and well-known musician and local celeb Bobby van Jaarsveld, who impressed clients and players alike during the fitness tests.

After the meet and greet the four Red clients were kitted out for the day at the Canterbury pop-up shop and a visit to the home-side’s change rooms gave them exclusive insight as to what it feels like to be a Cheetahs player before a home game.

And then the moment they waited for finally arrived.

The training squad completed a strenuous Bleep Test, a multi-stage fitness test in which athletes must do 20 metre shuttle runs in time with the bleeps until the bleeps get too quick for you. The Red clients showed excellent character but in the end it was Bobby and Cheetahs lock Reniel who impressed by reaching Level 10(3) of the test to emerge as the fittest of the lot. Then it was off to the gym where Quintin put them through their paces with explosive, strength and core and stability exercises. Afterwards the guys hit the Jacuzzi, followed by the dreaded ice-bath experience, where some choice words were muttered through clenched teeth. 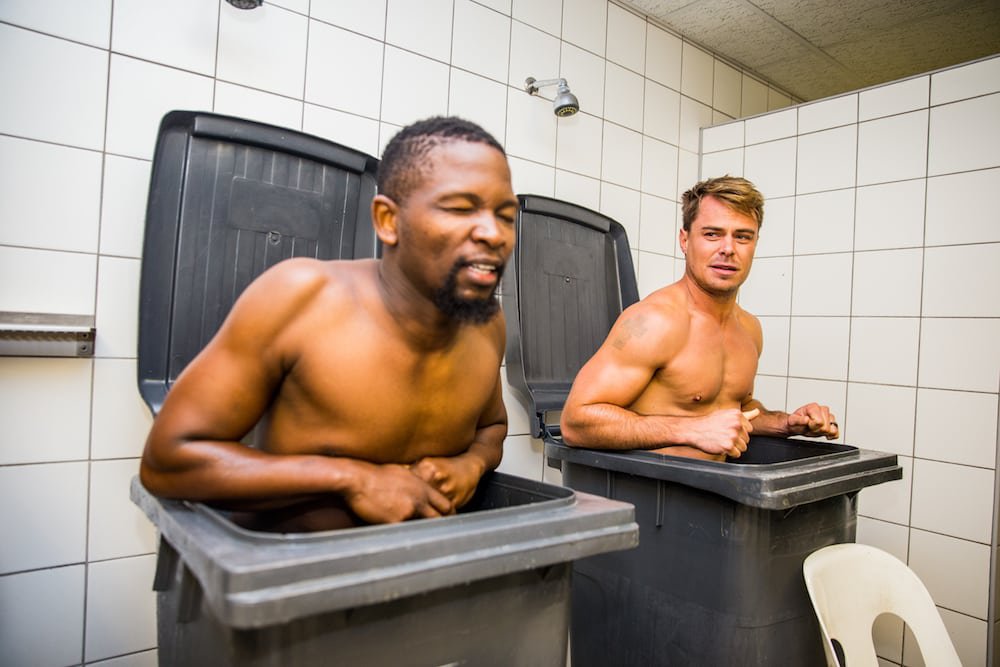 The players were suitably impressed with the Red clients’ efforts.

“It takes a lot from us as professional players to get used to training like this,” winger Sergeal Petersen said of the day. “But these guys just rocked up and jumped right in. They kept on fighting and working hard on the field and in the gym. It was very impressive. They gave it their all. I was chuffed with their effort.”

Reniel agreed. “It was a great achievement. The guys worked really hard and they looked good. I am proud of them.”

After a shower the clients were treated to a well-deserved massage and rub-down, before joining the players and coaching staff for drinks and dinner to complete a day unlike any other, an opportunity money can’t buy.

Having experienced this unique opportunity the Vodacom Red clients realised what it means to be trained, treated and spoilt.

“Now we understand the amount of time, energy and effort it takes to build affinity with a brand. This is entrenchment and you get to live the Vodacom brand,” Kur said.

Besides describing the ice bath after training as “extreme” and “hectic” Bobby said he had a superb time. “Today was amazing. I have never experienced something like this before, from a young age you dream about training with a rugby team and today we had the privilege to see and physically experience what they go through in the week before a match. It is a rare experience that these guys won through Vodacom, I think it is a massive privilege for anybody to be part of this.”

Vodacom’s Head of Rugby, Hein Ferreira had the following to say about the Vodacom Red Rugby Rewards lifestyle experiences:

“We acknowledge that our Vodacom Super Rugby audiences have other passion points than just rugby and with that in mind we created these events with one goal and that is to reward Vodacom Red clients with unique experiences to exceed their every expectation. Putting the customer first is the foundation on which Vodacom is built, so when we use words such as ‘unique’ and ‘tailored’ they are not empty promises,” Ferreira said.

Vodacom Red clients can expect more of these tailor-made experiences – go to vodacom.co.za/red for details on how to enter.

Expect more than a contract with Red: Premium plans that come with lifestyle benefits and rewards. Red by Vodacom. Power to you. #RedExpectMore.