Whether it's your first race or your 50th, these proven tips and techniques will help you conquer short-course races in record time.

One of the best distances in triathlon is the sprint—that’s a 750-metre swim, a 19K- 24K bike ride, and a 5K run. It’s especially great if you’re a weekend warrior with less than an hour a day to work out.

Related: This Guy Qualified For World Champs After He Couldn’t Complete His First Triathlon

Short yes. Easy, no. “I think the sprint is the hardest distance to race well at. It’s redline from the first swim stroke,” says Paul Ruggiero, a triathlon coach with Carmichael Training Systems. But the smarter you train, the more fun it gets. Get your six-week training program here. And rely on these tips for optimal performance in training and racing all three legs of the race. 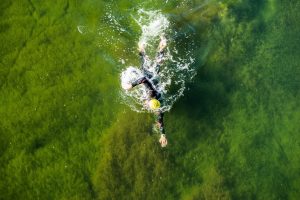 How to Train For the Triathlon Swim

Yes, you can be really fit and still be sucking wind after one lap. A classic reason is that you’re not breathing out. Exhale every time you put your face in the water.

“Swimming poorly breeds poor swimming. When you feel yourself falling apart, it’s time to be done,” says Grant Holicky, the head swim coach for Elevation Athletics in Boulder, Colorado, and owner of Wind Creek Performance. After that, you’re just reinforcing bad technique. Fifteen minutes of work many days a week will get you further than an hour of poor swimming twice a week.

Related:This Is How To Choose The Right Bicycle Saddle

You need stamina in addition to speed. Build it with this long-interval/short-rest workout by CTS’s Ruggiero: Warm up with 8×50 meters of easy swimming, then go into this pyramid, resting only 15 seconds between each set:

Swimming in open water has about as much in common with pool swimming as moonwalking does with walking on the moon. Take it from Kelly Dillinger, an amateur triathlete who trains and races with Play Tri Colleyville, who echoes the words of tri coaches around the country. “There’s no line at the bottom to show you where to swim,” he says. It can be otherworldly and disorienting. “If it’s an open-water race, don’t let that race be your first open-water experience.” How To Train For The Triathlon Ride

“The key to riding in a triathlon is to make sure you don’t overbike and then end up walking for the run. Ideally, we like to have athletes spin at 85 to 90 rpm,” says coach Jen Rulon. Stay away from super-hard gears, particularly on the hills, to ensure your quads still have some juice come run time.

Sprint-distance events are raced near the upper limits of your capacity, so train right under that “about to blow” threshold. Ruggerio recommends ten-minute intervals because they push you to suffer for a significant period of time. So it might look like this:

In a sprint, it’s important to keep pedalling across the top of a hill (no coasting when it levels off or starts to go down), Rulon says. Switch into a heavier gear and really push down the hill. Your competitors will be taking a break at the top; you’ll be way ahead.

Related: How to Train For a Triathlon: Your Step-By-Step Guide

How To Train For The Triathlon Run

The first time you put your bike down and start to run is…humbling. A bike-run workout is called a “brick,” since your legs feel like they’re made of dried clay. Train to get used to the feeling, says Ruggiero. Try workouts like this one two or three times a week:

Since it’s the last leg, you can use up every last drop of reserved energy on the run. Get faster with at least one speed workout a week, says Ruggiero. A favourite:

“Don’t focus on pace; focus on posture,” says Mohamed Elsaied, an International Triathlon Union-certified coach. Leaning a little bit forward is good; it pushes you ahead. But hunched shoulders mean you’re not running efficiently, he says.