We caught up with one of The Otter Trail's best runners. Here's his advice.

The Otter Trail is in full-force and we caught up with one of the best. Defending champion Christiaan Greyling set the fastest South African time when he won it last year. Not only is it Christiaan’s chance at bagging his second gold, but the event will see the grand finale of the Golden Trail Series. The series sees a host of the world’s best trail runners compete in five exotic locations throughout the globe, with The Otter Trail being its last stop.

The Golden Trail Series is the ultimate bucket list experience. Each race was specifically selected because its scenery, challenge, history and atmosphere. Christiaan, who has been running The Otter for six years was eager to compete but the universe had other plans – his son, Christopher, was born in September.

The top ten runners of the Golden Trail Series will compete against Christiaan on Saturday (20 October), with the 33-year-old up against world class runners such as Killian Jornet, Stian Angermund, and Aritz Egea.

He gave us a look into his training routine, diet, and his best running experiences. And it’s certainly worth the read.

Tell us about your training routine?

“I approach every race independently and carefully weigh up the demands of the course and what I will experience on that particular trail – assessing the technical aspects, the climbing and length of the course and altering my training specifically to accommodate the challenges that lie ahead,” he says.

But only 20% of his training is actually spent on the trail. He focuses on strength and fitness training to get him in racing form. He says a strict routine is key to his success.“I stick to a specific programme and I really find it works for me. It also ensures I have balance in all the right areas of my life.

“After going the distance on a Sunday – Monday is typically an easy day with lighter training of 8km to 12km – depending on how my body feels. On a Tuesday and Thursday I start my day quite early and run for about 10km to 12km with a group of friends at about 5.40am.

And there’s a science behind his training, too. With Christiaan consulting a biokineticist. “[My training is] customised to address areas where I lack strength and need more focus. This is something I only started this year and it has really worked for me. I also go for regular sports massages and in the afternoon I work on my track training with the best trail speed coach in South Africa.

“Wednesday is another easy day with just a 45-55 minute session. Friday is a complete rest day to prepare for my Saturday hill sessions and an extra-long run on Sunday of about three to four hours (which in the case of the Otter Trail is about 75% of the anticipated race time).” 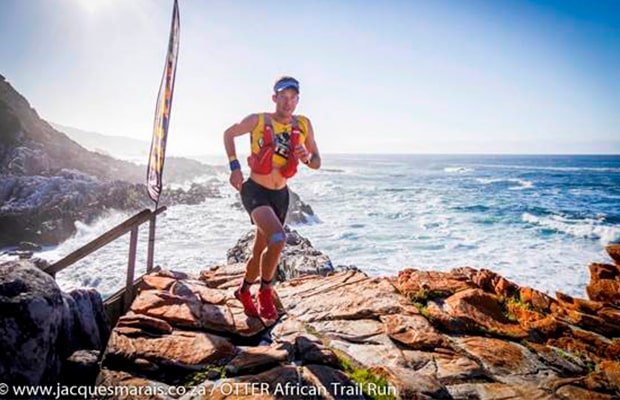 When it comes to diet, he’s never followed a specific one. However, Christiaan says you need to understand what works for your body and be conscious of your dietary choices.“For instance, I know I am lactose and gluten intolerant and I benefit from avoiding these from my diet. The more raw and fresh food you eat the better but don’t be radical – introduce foods and cut out foods little by little and make it a way of living – not just a pre-race adjustment,” he says.

His advice is not to jump onto the gravy train – healthy eating takes time. “Don’t try too many new fads – just follow a healthy eating plan and improve it every day. Keep your meal light, simple and easy to digest the night before your race. Include a bit of protein, less complex carbs and low on fibres and fruit. Enjoy your meal.”

“Make sure to introduce electrolytes the day before the race. I use Biogen’s electrolytes which don’t contain sugar. On race day eat your breakfast at least an hour and a half before the event starts. Make sure that your breakfast contains good carbs and good calories but is low in fat and fibre. It mustn’t be a heavy meal. This is not the day for bacon, eggs, and three slices of toast. That’s not a winning strategy. I usually have something like a sugar-free oat bowl, or a chia bowl. I sometimes have two eggs and black coffee because I don’t stomach lactose too well.

During a race like the Otter for example – I would recommend you take in about 200 calories per hour. Every 45 minutes – fuel your body with nutrients (carbs) so you don’t hit a wall. This may feel like you are eating constantly and you must – you need to teach your body to eat during the run.

“This means you should read your food labels to make sure what you are eating meets this calorie quota. I take in some calories through energy drinks [Biogen], or through energy bars and natural fruits like dates. Gels are a quick fix of about 100 calories so about two gels per hour should set you right. Start eating early in the race – even within the first half an hour and back off towards the end.” 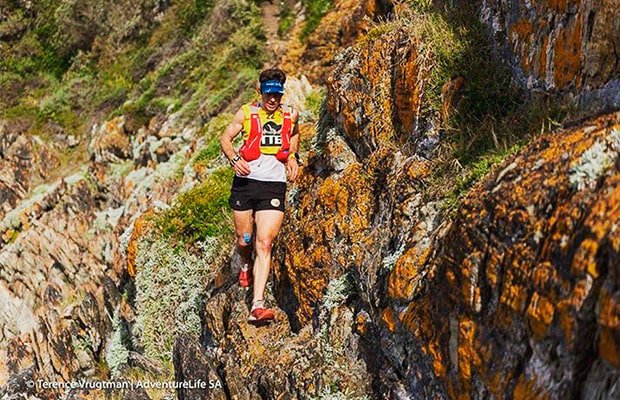 What have been your best experiences yet?

“In 2015, my wife Landie and I ran the Trans Alps – an eight day, 217km race where your total ascent is 16 000m – effectively 2 000m a day. It’s like running six ultras back to back. This was the last time I can remember being really challenged in a race and I learnt a lot about myself and my wife – and how much team work impacts your success,” he says. “We never matched up in strength and finished in second position; notwithstanding – it was an incredible experience.

“Another highlight was winning the Otter in 2017 – it took me six years to win that race and on my sixth attempt I finally achieved what I had set out to do and placed first! I am not sure I will win again this year – there are just too many world class athletes competing – but when I run it’s always to beat my own time.”

Where is trail running headed in SA?

“As a discipline trail running is growing organically – in fact it’s on the fastest growth trajectory of all individual sports and increasingly popular in the private sector. As a country we are fast becoming a global trail running destination with more and more people taking up the sport and aspiring to a more healthy way of life. As a sport trail running is also sustainable with little barrier entry because you need so little gear to get started – just a pair of running shoes. It’s a lifestyle and something the whole family can participate in and I believe it’s going to snowball in the next year in SA and globally.”

Inspired and want to get into the sport? Here’s his advice.

“It’s important to remember there’s no shortcut to anything in life that’s worthwhile; it takes time, commitment, discipline and patience. One thing I can confirm is that once you start you’ll never regret it – nor look back. Start slowly at Park Run’s and gradually build up to shorter trail races (of around 10km or 20km). Stay within your capabilities – there’s no point getting injured and then throwing in the towel as a result,” he says.

“Start slow, stay the course and enjoy the journey. Always have a goal – pick a race you want to attempt (something reasonable) and work back to see where you have to be in order to achieve that goal. Train and plan! It’s all about deliberate steps on a journey that will get you over the finish line. It also helps to join a trail running club or a group and to learn from those with more experience and of course make friends and have fun.”