“Mental strength far outweighs physical strength in this game. There’s no doubt about that."

The seventh Season of Survivor SA has been keeping us entertained for weeks now with a lot of plot twists, betrayals and triumphs on the island. But how exactly does one prepare to be stranded with 20 other strangers on unfamiliar territory with no food or shelter? (Not to mention you’re also being broadcasted across the country).

We got in touch with Rob Bentele, the strongman from the Sa’ula tribe, to find out how he got ready for the Island of Secrets. The 29-year-old events videographer from Richards Bay has been a force in the competition so far, and has shown that he loves putting himself to the test. But he signed up to compete on the show for more than just that. 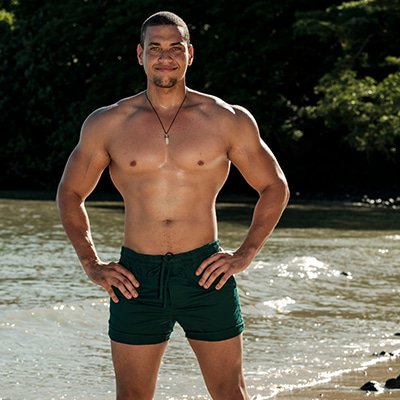 “I entered Survivor SA for two reasons,” he says. “For my love of challenges and for spiritual growth. I love that the game was designed to test these two elements and would, in essence, show me how to surpass what I believed my limitations were.”

Along with the obvious physical strain the island puts on castaways, there’s a major mental impact on each contestant that makes the competition that much more daunting.

“Mental strength far outweighs physical strength in this game. There’s no doubt about that. Challenges make up a small part of your day. Life back at the camp and learning to take on the elements with your opponents… that’s where the real games begin.”

"I have one power. I never give up" – Bruce Wayne. Last week's episode became a "Batman vs Superman" dual. Taking out Rocco was the hardest call I've had to make to date. You truly deserve the title of Superman my brother ?? #survivorsa #batmanvsuperman

Rob started training as soon as he applied to be on the show. He focused a lot on meditation and bulking up his mental strength which helped him improve his nutritional and physical preparation.

“I had a solid three months to get in shape – both physically and mentally. Complemented by an intermittent fasting type of diet, my training was geared towards endurance,” he explains. “In preparation for the island, I ate twice daily, had a protein shake before bed. I also made cardio and resistance training the key staples of my workout plan.

“However, the most important part of my training was honing my mental stamina through meditation. The habitual process of training your mind to focus and redirect your thoughts really took my preparation to the next level,” he admits. “Many people think of it as a way to reduce stress and develop concentration – which is true – but in my instance, it proved invaluable in increasing my awareness of myself and my surroundings on the island.”

The half-Zulu, half-Austrian advises future contestants to get to know themselves before entering and recognise that this competition will challenge every part of one’s being.

“Survivor SA changes you forever. All your strengths, weaknesses and things about yourself that you never knew existed, will be detected and magnified. You’ll come to understand yourself in a deeper way than ever before.”

His advice to future contestants is to invest time in getting to know their true selves before getting to the island. “The skill of being able to manipulate and push the limits of your own boundaries will prove more useful than being able to push others.”

I got no caption for this one… #survivorsa #brothers #family #amigos

Rob has also been part of a dynamic duo alongside tribe-mate Nathan Castle, who also had an intense preparation routine before the island. Together, they kept the other contestants on their toes and became fan-favourites for many watching at home.

We look forward to seeing how far Rob progresses on Survivor SA season 7! For more, be sure to check him out on Instagram and Twitter.

What’s the first thing you did when you got back home from the island?

“Showered and ate… lots. But jokes aside, Survivor SA has the ability to show you what is truly important in life. While on the Island, I realised how frivolous materialistic desires are, and that human beings only need two things in life: love and nutrition. It’s that simple, nothing else really matters.”

What were you most afraid of when you found out you were one of the castaways?

“Losing my positive mindset. The energy you put out comes back to you with astounding accuracy. Positive emotions inspire positive thoughts which lead to positive words and actions, which produce positive results.”

What kept you motivated while on the show?

“My family. I’d do anything to make them proud.”