How Nicholas Dlamini Made It To The Cycling World Stage

Nicholas Dlamini has pedalled his way through many of the troubles life has thrown at him. But his stubborn determination allowed him to break the cycle.

The twisty mountain passes of the Alps are ahead; a far cry from his home in Capricorn Park near Muizenberg, Cape Town. And yet, that is exactly where Nicholas Dlamini’s bicycle took him, when in June 2017 he won the King of the Mountains category at the under-23 Giro d’Italia – a first for an African.

If it’s his bike that got him there, it’s his passion, unwavering dedication and pro-class work ethic that is going to take him further. In August 2017, the 22-year-old took another huge pedal stroke toward that goal, when he made the step up from the Dimension Data Continental team (a feeder programme of sorts) to join the likes of Mark Cavendish, Daniel Tekle- haimanot and Edvald Boasson Hagen on Team Dimension Data for Qhubeka’s World Tour outfit. 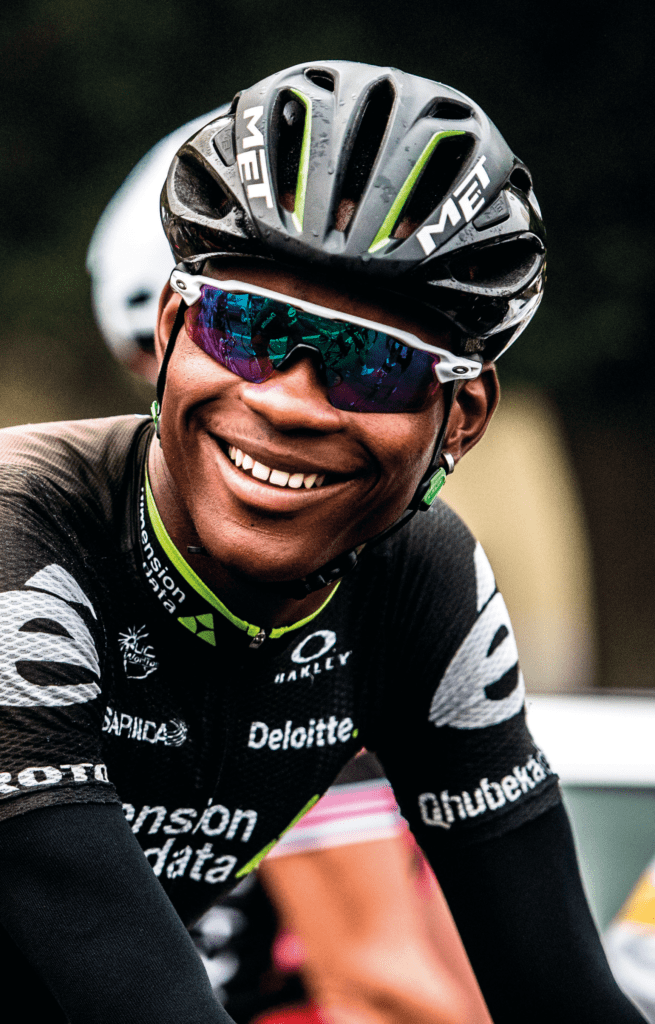 Dlamini was back in South Africa for Dimension Data’s annual training camp, and spent some time at home. The informal settlement of Capricorn Park is your typical big-city fringe community, struggling with the usual socio-economic problems: drugs and crime, low education levels, and alcohol abuse.

It was here, as a 12-year-old, that Dlamini first got into cycling – thanks to a friend, Vuyisa Mgolombane, who persuaded him to join a small cycling club. There he cultivated his love for riding a bike, and realised it could take him somewhere – not only in the physical sense, but emotionally and financially as well.

South African ultra-trail legend Ryan Sandes remembers that 12-year-old. “Nic came to one of the first JAG Foundation Trail Running Camps I hosted,” Sandes explains. “Straight away you could see this kid was talented. I mean, just a natural athlete; but also, so determined to succeed,” he says.

“I tried to convince him to become a trail runner, but he very politely told me that he wanted to ride the Tour de France.” That wasn’t the end of their relationship, however; and both Ryan and wife Vanessa have been an integral part of Nic’s journey ever since, acting in a mentorship role. As though they have a son who has succeeded, they couldn’t be prouder.

“It was a difficult decision,” Dlamini jokes, thinking back. “I was good at both running and cycling. But honestly, I had cycling at heart, because I could get around a lot faster with the bike.”

At 17, Dlamini met Sven Thiele. Thiele’s HotChillee company runs the Cape Rouleur, a five-day, 600km speciality event through the Western Cape. Dlamini shone in this non-traditional event, and it became a stepping stone to his first European race experiences, thanks to Thiele.

Of course, you don’t simply go to Europe and get results straight away. It’s notoriously difficult to ‘learn’ how to be a pro bike rider. And you don’t just ride your way into a world tour cycling team on talent alone.

In fact, natural ability – especially in a sport like professional road cycling – is a very small part of the consummate athlete package. By all accounts, Dlamini is that full package, and that’s perhaps demonstrated best by how he finished his matric.

The World Cycling Centre Africa in Potchefstroom – whose graduates include Merhawi Kudus and Daniel Teklehaimanot – was the base for the next part of Dlamini’s journey.

While there he had to complete his schooling, through correspondence; which came with endless admin issues for him (and Vanessa, who helped him through that year). But he stuck it out, rolling with every challenge and getting his matric done.

Related: How To Survive The Cape Town Cycle Tour On No Training

This stubborn determination to succeed also impressed Dimension Data team principal Doug Ryder, who in a press interview announcing Nic’s move to the pro tour team commented: “This team was built on a dream; and to see a young rider like Nicholas, who came from limited means and opportunities to succeed… Nic has big dreams, and has worked so hard to realise his dreams, focusing first on getting through school and then on his passion for riding his bike.”

“I’ve learnt that one has to dream big, and work hard for those dreams,” Dlamini says when asked about his secret to success. “And to have role models,” he adds, mentioning names like Sandes and long-time professional cyclist Ben Swift among others. “That worked for me; and if I could give the kids back in Capricorn Park one bit of advice, it would be that – look up to others, and work hard.” 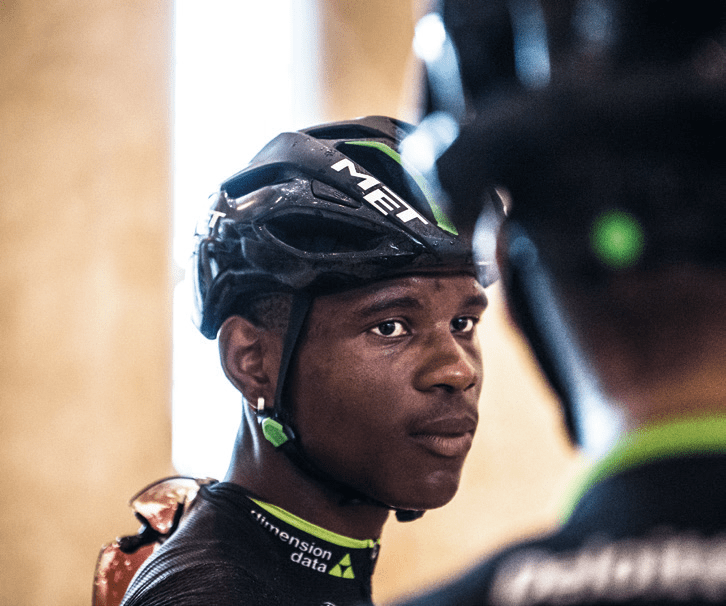 However, Dlamini points out, it’s crucial for youngsters to balance their studies and sport. “Work harder than everyone else in both,” he says. His Capricorn Park upbringing groomed and drove him to become the athlete and person he is, and he’s never forgotten his roots. That background (and its potential traps) gave him the hunger and edge to go and achieve – and he has; and yet he’s managed to stay humble through it all.

“Where he’s come from and where he is now… it’s very easy to get ahead of yourself, and perhaps get a bit of an attitude; but he’s got none of that,” says Sandes.

“It’s been very cool to follow his progress, and see him succeed,” Sandes continues. “But I think perhaps most important is that he has stayed the same person I met at that JAG running camp all those years ago. He’s still as humble and unassuming as he was back then, but he’s also really grown as a person – it’s inspiring to see him now kind of looking after his mother and sister.

Related: From Poverty To Winning Bronze At The Commonwealth Games

“He sees the bigger picture, you know. He’s been saving up to build onto his family home, and buy more property – and very few young sportsmen think like that.

“I think if he does ride in the Tour de France one day, it’ll be one of my proudest moments,” Sandes says. “Just to see someone I know who a decade ago had hardly ridden a bike, and is now riding the biggest bike race in the world. That would be the ultimate.”