How A Little Tape Can Help You Squat Better

Putting a piece of tape on your back could fix your squat form, according to Jim Ferris, who has trained NFL players and is the owner of Gym Ferris Fitness in Philadelphia, Pennsylvania.

You place the tape between your gym shirt and shorts before you perform any two-legged squat—like a back or front squat. “If you break the tape, it means you’ve gone past your safe range of motion,” he says.

Here’s how it works: The tape stays put so long as your back and pelvis are in a safe, stable relationship with each other. When the tape detaches— you should hear it break—it indicates that you left that good position and have regressed into dangerous territory. 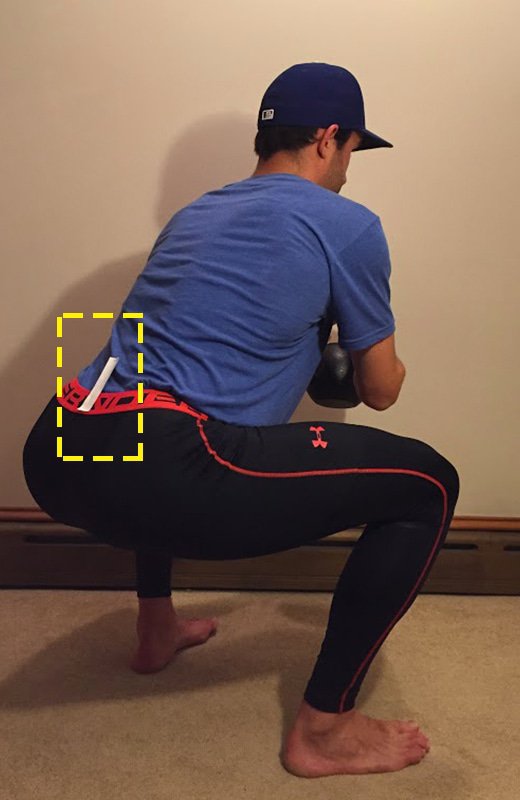 “Broken tape means that you have butt wink,” says Ferris. “Butt wink occurs when you’re squatting so deep that you go past the end range of motion in your hips.” In theory, you shouldn’t be able to squat any lower—it’s end range of motion!—but instead, your pelvis tucks under your spine, allowing you to drop deeper. Under heavy load, that pelvic position is unsafe because it puts undue stress on your tendons, ligaments, and low back, potentially causing pain.

“It creates a domino effect that puts wear and tear on a lot of sensitive areas,” says Ferris. “It could cause the type of injury that immediately knocks you out. But far more often it causes cumulative trauma that leads to nagging pain and injury in the long run.”

You might have heard you should always squat ass to grass, as deep as possible, says Ferris. “But people are built differently and many simply can’t and shouldn’t go that deep. If you do, you’re going to butt wink and set yourself up for injury.”

Keep in mind that if you’re not doing a squat with any weights, butt wink isn’t necessarily a bad thing. “To do a pistol squat, you pretty much have to have butt wink—it’s when you load that unstable position where it becomes dangerous,” says Ferris.

So how low should you go on a loaded, two-legged squat? As low as you can go without breaking the tape. “That depth changes depending on how wide your feet are spaced apart, and whether your feet are angled out,” says Ferris. “Use the tape and remember your ideal depth for your different squat positions. You’ll avoid a lot of problems down the road.”

And no, this isn’t suggesting you should obsess and never squat without tape. It’s a feedback tool that can give you insight into your squatting mechanics, and ultimately help you improve them.