Which of the three grips are right for you?
By Christa Sgobba

It’s one of the most basic, everyday movements that make its way into the weight room: With the deadlift, you’re simply grabbing something from the ground and picking it up.

Sounds simple, right? The basic movement is, but there are differing expert opinions on how you should execute it—starting with how you grip the barbell in the first place.There are three options for gripping the barbell when you deadlift: the basic double overhand grip, the mixed grip, and the hook grip, explains trainer Tony Gentilcore, C.S.C.S., cofounder of Cressey Sports Performance in Boston. And which one you should employ depends both on your experience with the deadlift and your goals. 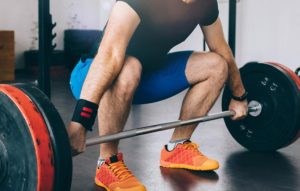 WHEN YOU SHOULD USE THE DOUBLE OVERHAND GRIP FOR DEADLIFTING
Take the double overhand grip. This is the classic way to hold the barbell, with both your palms facing you.
This is the best grip to start with when you begin deadlifting, says Gentilcore. It’s the easiest, most intuitive, and probably the safest. At some point, though, your grip is going to become the limiting factor when you deadlift. That means the only thing stopping you from hoisting the barbell from the ground is that you don’t have the grip strength for it. When this happens, you’ll notice that the barbell will become harder to hold. “When your grip fatigues, you may be able to get a rep or two in (at that weight), but the barbell is just going to roll out of your hands,” Gentilcore says. 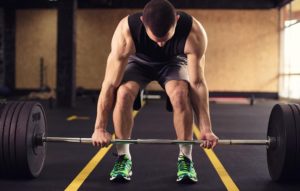 WHEN YOU SHOULD USE THE MIXED GRIP FOR DEADLIFTING
That’s when the mixed grip should come in. A mixed grip is an alternating grip—one hand uses overhand, the other uses underhand.
“It’s a lot harder for the barbell to roll forward out of your hands with the mixed grip,” Gentilcore says. And when you don’t have to worry about the barbell slipping, you’ll probably be able to progress with adding load, which is key for putting on size and gaining strength. That’s why the mixed grip is the best choice for a lifter whose grip has become the limiting factor in adding weight to his deads, Gentilcore says.

Only thing, though, is you need to use the mixed grip smartly. If you continually keep the same hand as the overhand and the same for underhand, it’s possible that you can develop muscle imbalances that can leave you vulnerable to injury, he says. In particular, the side using the underhand grip is more prone to injury if you always lift with it in that position. Because this grip recruits your biceps slightly more, it’s possible you can rip your biceps tendons on that side. The solution, then, is to alternate grips on every set, says Gentilcore. So if your left hand is using the overhand grip in your first set, it should switch to underhand for your second—and vice versa for your right hand. This should prevent any muscle imbalances from developing. 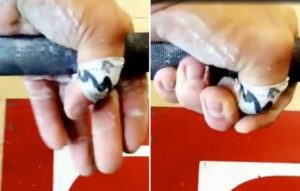 WHEN YOU SHOULD USE HOOK GRIP FOR DEADLIFTING
So what about the hook grip, then? A hook grip is similar to the double overhand grip in that both palms will be facing you, but it’s made stronger by wrapping your thumb around the bar, trapping it between your other fingers. It’s popular with Olympic lifters and power lifters, says Gentilcore, but it’s probably not the best option for the average guy who hits the gym. “It’s very uncomfortable and it takes some time getting used to,” says Gentilcore. Still, in some cases it can be even more secure than the mixed grip—but you have to get the positioning down, which takes some time getting used to. BOTTOM LINE ON DEADLIFT GRIP
That’s why the mixed grip is generally the way to go for guys whose grips have become the limiting factor in their deadlifts, says Gentilcore—as long as they make sure to alternate grips every other set. This will help you grasp the bar securely, helping you progress with adding weight. Another possible way? You can use chalk, which adds friction, Gentilcore says. Or you can consider using straps, too. Straps wrap around the bar and take a lot of strain off your grip, preventing the bar from slipping and helping you add weight. If your goal is to get stronger and build muscle, straps can help you achieve that. If you want to improve your grip, well, then you’re better off deadlifting without them, so you can home in on that weakness. And if you do use straps, it’s best not to use them exclusively. Consider ditching them during training blocks when your purpose is to make the lifts harder, Gentilcore says.