Recently Usain Bolt celebrated his 28th birthday and also the 5-year anniversary of the two World Records he set at the 2009 IAAF World Champions in Berlin. This anniversary marks an historical time in athletics as for three decades; no 100m World Record has stood for so long. It also highlights that Bolt has moved the World Record forward by more than a tenth of a second something no one else has achieved. Below is a Q&A with the World’s Fastest Man about his massive achievements, his accomplishments, his undoubted legacy and what else he has broken besides records.

Your 100m record has now stood for five years. It’s been more than three decades since the 100m World Record was unbroken for that period. Why do you think your record from Berlin has stood for so long?

I don’t know really. For me I’ve struggled with injuries over the past five years so it’s been hard to be in the condition that I was in Berlin to really challenge that record. In London I felt good, and I wasn’t far away but everything has to be in your favour – your condition, the weather, the track, and then if you execute your race perfectly from the start through the transition and then driving to the line – then you have a chance.

In Berlin, you moved the World Record forward by more than a tenth of a second, no-one has done that since the measurement of time in hundredths of a second was introduced more than fifty years ago. Is that a key part of your legacy?

Yes, I think it is definitely part of it. But gold medals are what I’ve always counted as being the main aspect of my legacy, winning three gold medals again in London and defending those 100m, 200m and the 4x100m titles was the moment. I’m looking ahead to Rio and I really want to be in a position to win those medals again. If I did, I think people would talk about that for a long time.

Thinking back to that 100m final in Berlin, what do you remember of the night?

I remember the night well, the atmosphere in the stadium, walking out there and hearing the people. The crowd was brilliant. I was in really good shape. I felt good and had a confidence that I was going to do it. The track was so quick as well, I liked the blue track. I remember that I started really well that night, and ran really hard through the line. It was a great night. I was going there to prove myself to the world again, that I was the best in my discipline.

It was a similar experience. I ran conservatively through the heats and so had good energy for the final, which I knew I was going to need. Coming off the bend I knew I was running quickly and I was just focused on pumping my arms well and opening up my legs. I wanted to win, but win well more than run a quick time – but when I saw 19.19 on the clock after I finished I was really happy. 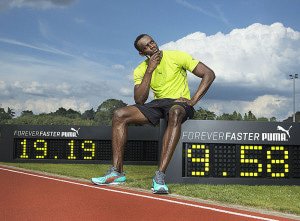 Looking back further still, when did you first believe you could break a World Record?

How did things change for you after New York?

People started paying more attention to me. I think that was the moment I really arrived in track and field. It was an Olympic year so there was a real spotlight on the sport to see what kind of form athletes were in and so there was some good interest in me. But Beijing was where it all started.

So the Legend of Usain Bolt was really born in Beijing. Had you ever considered that you could return to Jamaica with three gold medals?

I dreamed about it, but never thought it would actually happen. Next year the World Championships are in that stadium, and I’m really looking forward to going back to where it all began.

You were the first sprinter since Don Quarrie to hold both 100m and 200m world records simultaneously. How much did you know about him growing up, did he inspire you?

Yes, everybody knew about Don, as a young kid he was a hero of mine. He did great things to raise the profile of Jamaica as a nation in track and field and what he did in the 100m and 200m was phenomenal. So to be mentioned alongside him is a real honour for me.

Before the Olympics in London you said you wanted to become a legend and win the gold medals again, which you proved to the world. If you were to win more gold medals in Rio, what would that make you?

I think I would still be a legend. It’s hard to imagine anyone would do that again, so I’m in a privileged position to be going for it. That would keep people talking about me for years to come.

Looking ahead, which of the two records is the one you can most challenge?

I think the 200m. I would love to take that record below the 19 second mark, as that is something I’d be really proud of. That is a goal of mine, and the possibility is there. I need to stay injury free for an entire season, from pre-season training all the way through then I know I can do it.

Where do you feel you can take the 100m and 200m – on a perfect day on a fast track, in peak condition, what is pushing the absolute boundaries?

The 200m is the one where I can really push it. I’ve thought about this a fair bit, as I said, taking it below 19 seconds is what I think I can do. That would be pushing it to the limit.

Records aside, what else have you broken over the past five years?

What makes you `Forever Faster’?

Everything. It’s a great slogan, it describes me perfectly. I am forever faster, when PUMA came up with this I thought, yes – this is me. 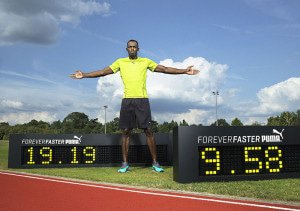