The world’s fittest man, 4 x CrossFit Champion Rich Froning, will kick your ass (into shape). Endure his workout to reach your full potential.

Rich Froning Jr. is upside down, hands on the floor, heels against a wall, calmly explaining the challenges of handstand push-ups. “Your whole body should be rigid,” he tells me.

“Brace your core and clench your glutes. Trust your strength and, of course, remember to breathe.”

I’m smiling for two reasons. First because he thinks a guy like me – 42 years old and 90kg of marbled meat – actually has a shot at pulling off this move. Second because he offers these tips while simultaneously cranking out reps. Froning, 25, is the only two-time male winner of the Reebok CrossFit Games, a three-stage test of diabolically tough exercises you should not try at home.

We start off with my hands on the floor and toes on a box so I can learn the movement. But even with the CrossFit equivalent of training wheels, it’s not easy. Blood rushes to my head; my torso feels as if it were made of marble. From there we go to the wall. I kick up my legs, and with a little adjusting I’m in a handstand. It feels like a win, until I remember that there’s more to the exercise than the starting position. Slowly I lower my body. But when I try to push back up, my torso melts, my legs wobble, and I topple ass-over-teakettle. “You forgot to brace your core,” Froning says. On the second try I squeeze out a couple of reps. I feel as if I’ve done a minute’s worth of conventional push-ups in those few seconds. With that one exercise, I begin to understand CrossFit’s huge appeal, and why its fans are so devoted to its mix of training for strength, endurance, and speed. These are qualities the 177cm, 88kg  Froning takes to extremes. He can bench 160kg, squat 200, do 75 pull-ups in a row, and run a 5km in 20 minutes. And yet during our two-hour sweat fest, he emphasises the communal aspect of CrossFit, not its competitiveness.

“We’re big on proper form and not letting you progress until you can control movements even when you’re fatigued,” he says. On any given day, everyone at the box (a.k.a. CrossFit gym) is doing the skeleton of the same workout. But each guy is going at his own pace, depending on his level. Froning shows me progressions for rope climbs, ring exercises, and various lifts. It’s brutal but fun. Even doing the moves the right way up, my head is spinning. Use the exercises on the next page to build strength and stamina wherever you train. 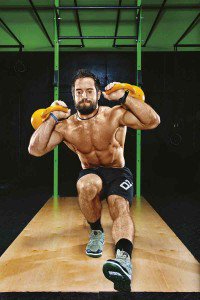 As a prerequisite, you’ll need to master the basic body-weight squat: with your feet shoulder-width apart and parallel and your arms straight out, push your hips back and bend your knees to lower your body until your thighs are parallel to the floor. Stand back up. When you’re able to do 40, progress to pistol squats. Be patient; it’ll take time and effort to build the required balance, core stability, hip mobility and leg strength.

To begin, you’ll need something to hold on to or to lower your body to. Option 1: stand with your working leg next to a pole. Hold on to the pole with one arm as you extend your non-working leg out in front of you. Push your hips back, lower yourself as far as you can (it won’t be far at first) and rise back up. Make sure your leg is doing the work; your arm is just on the pole for balance. Option two: stand with your heels a few centimetres in front of a box or bench. It’s easiest if you start with a high box (45 to 60cm) and work your way down. Hold a light dumbbell straight out in front of you with both hands as a counterbalance as you push your hips back until they touch the edge of the box. Rise back up. When you can do 10 with each leg, lower the box until you can do 10 on a 30cm box. Now you’re ready to try the pistol squat with a full range of motion and your nonworking leg extended in front of you, parallel to the floor. 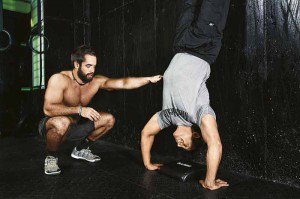 If you can do two sets of 20 standard push-ups with good form, add a challenge by putting your toes on a 30cm box or bench. When you can do two sets of 20, advance to a higher box until you can hit those numbers again. Next try the pike push-up, with your toes on the high box, hips bent about 90 degrees, and torso nearly perpendicular to the floor. Once you can do two sets of 10, you’re ready for the handstand. Start with a pad beneath your head; have a buddy hold your feet the first few times. Kick your feet up to the wall, straighten your legs, and bend your arms as you slowly lower your head to the cushion. Aim for one or two reps for your initial set, and build up. Last year at the games, Froning did eight 68kg medicine ball cleans, a 30m medicine ball carry, seven handstand push-ups, and another 30m carry. He did all this three times – in seven minutes. 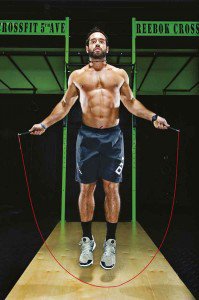 First you need a rope that’s sized correctly. Place one foot on its centre point and raise the ends. They should reach almost to your nipples (with the handles horizontal). “Keep your butt and stomach tight, feet pressed together under your hips, and eyes looking forward, and bounce on the balls of your feet over the rope,” he says. That’s a single-under. Practice this for two to five minutes as part of each warm-up. For double-unders, you need to bounce a little higher and speed up your arms by snapping your elbows – almost as if you’re casting with a fishing rod. Start by doing one double-under at a time in the middle of your single-unders. Then do multiples, working up to 20 in a row.