CHALLENGE: Can You Complete This CrossFit Workout Without Tapping Out?

Three CrossFit champs share their favourite workouts for losing fat, building muscle and getting ripped in no time. Are you ready for Beast Mode? Crossfit is like professional soccer: you either love it or hate it. Detractors say it’s risky, dangerous, and overly focused on extreme moves that do nothing to build long-term fitness. Devotees laud the community spirit, and then lift their shirts to show off their results. What’s undeniable is that CrossFit’s ethic of “constantly varied, high-intensity, functional movement” is motivating more people to get fit. It’s now the go-to training programme for average Joes seeking strength, stamina and athleticism. CrossFit boxes are popping up all over, and it’s spawned an increasingly popular sport, too, with 200 000 athletes competing in the CrossFit Games Open, a qualifier for the CrossFit Games, which is televised live on ESPN. On the following pages, you’ll meet these three top CrossFit competitors and learn the workouts of the day (WODs) that got them into the best shape of their lives. Use their strategies to get fit fast and stay lean for life. No box necessary. No one messes with Deputy Sheriff Jon Pera when he’s doing rounds at the Men’s Central Jail in L.A. Pera’s physique commands respect, and the fact that he’s a four-time qualifier for the CrossFit Games doesn’t hurt either. He can deadlift 225 kilos and squat 215. “The inmates recognise me from ESPN now,” says Pera. “They ask me for workout advice.” Pera’s CrossFit journey began in 2009, when a fellow deputy introduced him to the concept of mixing movements from different disciplines, including gymnastics, Olympic weightlifting and athletics. Fitting in these workouts is tough, given his full-time job and three kids. “Everything is scheduled to the minute,” he says. “I do a morning and an evening session. My goal is to win it all,” he says. “But there’s a lot that’s out of your control.” Part of the challenge, he explains, is that in the Games events are a mystery until shortly before the competition. “You have to prepare for anything.”

Designed to mimic an MMA contest, Fight Gone Bad is a frantic 17-minute gut check. Pera’s best Fight-Gone-Bad score is 463. Do It: Begin at any station and do as many reps as possible in 1 minute. Keep at it until you’ve done 1 minute per station. That’s 1 circuit. Do 3 circuits, resting 1 minute between them. Beginner:

Score: You get 1 point per rep; 1 point per calorie on the rower. Goal: 250. Rowing Machine – Sit on the seat of a rowing machine, place your feet in the footholds, and hold the handle with an overhand grip. Keeping your lower back flat, extend your arms and slide forward. Then push through your feet, drive your hips back, and pull the handle toward your belly button. Your mantra: Legs, then hips, then arms. Wall Ball – Stand facing a wall that’s 1 to 2 metres away. Hold a 10kg medicine ball at shoulder height. Keeping your back straight and torso as upright as possible, squat. (Try to lower yourself until your hips are below your knees). Explode out of the squat and throw the ball upward so it strikes the wall (ideally at a 2m-high marker). Catch and repeat. 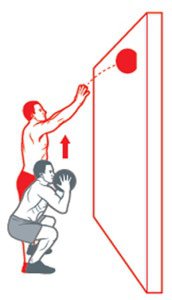 Sumo Deadlift to High Pull – Stand behind a 35kg barbell. Squat and grab it using an overhand, shoulder- width grip; then stand explosively, pulling the bar to shoulder height. Return it to the floor and repeat. 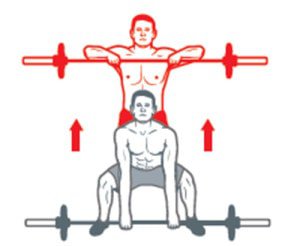 Box Jump – Assume an athletic stance behind a 50cm-high box. Squat and jump onto it. Stand up. Step down; repeat. 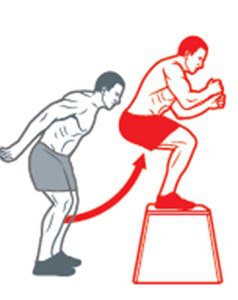 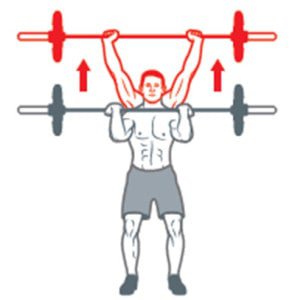