Can You Make Running With A Mask More Comfortable? The Experts Weigh In

We chatted to Sports Scientist Ross Tucker, ultra trail runner Ryan Sandes, and triathlete Kyle Buckingham on the physiology and psychology of exercising with a mask and how to make it easier.

Cyclists and runners countrywide have been rejoicing at being able to get out once more and enjoy their daily bout of outdoor endorphins, but since it is now mandatory to wear a mask while out in public – and that includes while out exercising – we have been hearing from runners and cyclists alike how they are struggling to exercise with a mask on.

“Don’t get me wrong, I’m loving being able to get back to my 5km around the neighbourhood, but I feel like I’m battling to breathe with a mask on and as a result, I am running much slower than my usual 5min/km pace.” says Julia Collins. “My mask gets so damp while I run – it’s pretty unpleasant,” says Grant Ashley. And Kurt Davids reckons, “I fatigue much quicker than when I’m not wearing one.” One cyclist, Patrick Day says “I feel claustrophobic with a restrictive mask on.  I am starting to get used to it, but it’s really uncomfortable.”

Uncomfortable or not, we all have to comply with the regulations, so MH chatted to Sports Scientist Ross Tucker  and two of SA’s leading sportsmen, ultra trail runner Ryan Sandes, and triathlete Kyle Buckingham on the physiology and psychology of exercising with a mask and how to make it easier – if at all.

Why The Law To Exercise With A Mask On?

Dr Tucker says “Firstly, remember that the mask is NOT for you, it’s for everyone else. The saying is “My mask protects you, your mask protects me”. That’s because the biggest effects of masks are to keep moisture IN, not to prevent other air that may carry the virus from getting in. The best evidence so far suggests that you wear a mask to reduce your risk of SENDING the virus out, not to block it from coming in. So, the point is, you want that mask because you’re helping others. Therefore, wear it. Even if the evidence on quite how beneficial it is differs depending who you listen to.

Related: Everything You Need To Know About Wearing A Cloth Mask

Why Is It Harder To Exercise With A Mask On? And How Does It Affect My Running?

In short, because there is an increased resistance to breathing.  “It literally makes the work required to move air in and out higher, and because the amount of air we need is set by our pace, and our muscles, we have no choice but to breathe harder to meet it.  Or we slow down,” says Tucker.

“But a big part of it is also perceptual.  Because it feels restrictive, it elevates the effort required to do the same task. There are studies, for instance, during weight lifting tasks, where the perception of effort was measured on a scale from 0 to 10 in people who wore a mask or those who did not, and the results showed that the effort level rose more steeply in those that wore the mask. Logically, once our effort levels become unacceptably high, we either fatigue and stop, or we slow down so that it feels easier.  And that’s for weight lifting, not even cardio like running where our breathing rate and depth is much higher.  So what this means is that you’ll be running at a pace that’s meant to be easy, but it’ll feel much more difficult, and that’s when we start to really feel much worse – expectation is not met by reality.”

Related: How To Keep Your Face Mask From Fogging Up Your Glasses

“These two things are linked.” Tucker continues. “The reason the perception of effort is higher is partly because we’re breathing against a resistance.  Plus it’s humid – the mask gets wet because you’re breathing out water vapour. So then what can happen is that you get all this moisture accumulating at the bottom of the mask, and that in turn can make your nose run.  So it kind of kicks off a chain reaction.  Not fun.” 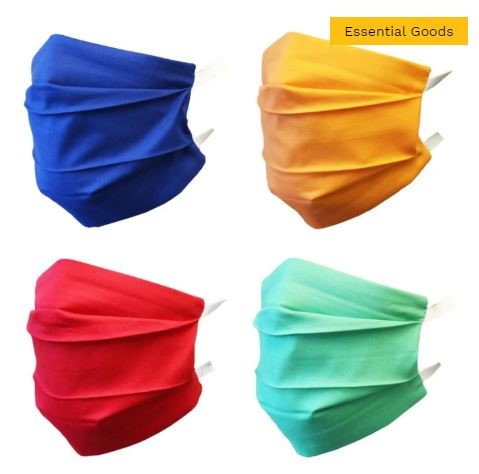 Will I Get Used To It?

“You’ll perceptually adapt, but you won’t ever adapt physiologically,” says Tucker.  It’ll always be harder than running without one, because it’s a physical barrier, and it makes the work of breathing harder.  So your mind may become accustomed to it, and just like training, you’ll tolerate it better, so that the three minutes of discomfort now becomes 10 minutes later, then 20 and so on, to the point that you’ll be able to do those easy runs without feeling suffocated.  But it’s not like it’s not there, or that you develop a higher breathing capacity without also feeling like you’re breathing harder.  So it gets better, yes.  And that’s all one should worry about for now!”

Will It Actually Improve My Running?

“If you have a perceptual challenge that makes it harder to run say 10km in your normal 55 minutes, then if you take that mask off, running 55 min for 10km will feel much easier.  Has it made you a better runner?  In a way, but that’s a slightly different question or scenario.  When you take away the thing that makes it harder (like altitude, or heat, or running up a hill), then of course it is easier and you’ll feel capable of going faster.

“But I’m not convinced that if you train with the cloth masks being used for the virus, and then run a race or time-trial, you’ll do any better than if you train without a mask,” Tucker adds. There are some masks that are designed with valves to restrict air flow specifically to greatly increase resistance of breathing, and there are some studies showing that they can change some aspects of lung function, and possibly even performance. I suspect that this might be possible if you train specifically in a certain way while wearing these specific masks.  In general though, the much thinner cloth masks, just being worn on our normal runs, probably don’t do much for performance at the limit, no.”

How Can I Make Running With A Mask Easier?

1. Tuckers advice: The thinner the material, the better.  There’s a payoff, obviously, between the thickness of a mask and its effectiveness.  Thin masks won’t be as effective at stopping droplets from getting into the air, but given that you’re supposed to be social distancing when running, you can afford this payoff.  If you are genuinely 2m or more from other runners, and outside, then you can afford a thin mask, whereas if you’re going indoors, say shopping, you’d want something thicker.  So it might be that your masks become “specialist”.

2. Try to set it up so that you have space at the bottom – it lets air and especially moisture out.  If it’s sealed at the bottom, then the warm, damp air recirculates, and that’s the main source of discomfort.

3. Triathlete Kyle Buckingham has been cycling and running with a mask. He recommends reducing the pace you normally run at when not wearing a mask. It’s ‘easier’ to run slower, so by reducing your effort, you reduce the amount of air needed to breathe at that certain pace. Use this time to maintain fitness, not smash out a PB.

4. “If you nasal breathe it definitely helps” says ultra trail runner, Ryan Sandes, “but it can be a bit harder, so you can possibly try breathe in through your mouth and out through your nose. Then the mask doesn’t get as damp and soggy.”

What Type Of Mask Is The Best For Running?

“A buff is probably best, because you can also rotate it every few minutes and try to breathe more through dry fabric.  Again, because its thinner, it’s a less effective mask, so then you’ve got to make up for that by being more concerned about distance to other runners.” – Tucker

“I definitely prefer a buff when cycling and running. It’s way more comfortable and it also keeps you warm in these cold winter mornings.” – Buckingham

“I have been running with a buff (as seen in the video above), it’s not the three layers, but I believe that running in the outdoors there is less chance of catching or spreading the virus. So I cut holes for the ears in the buff so that it doesn’t slip down and will stay in one place whilst running.” – Sandes 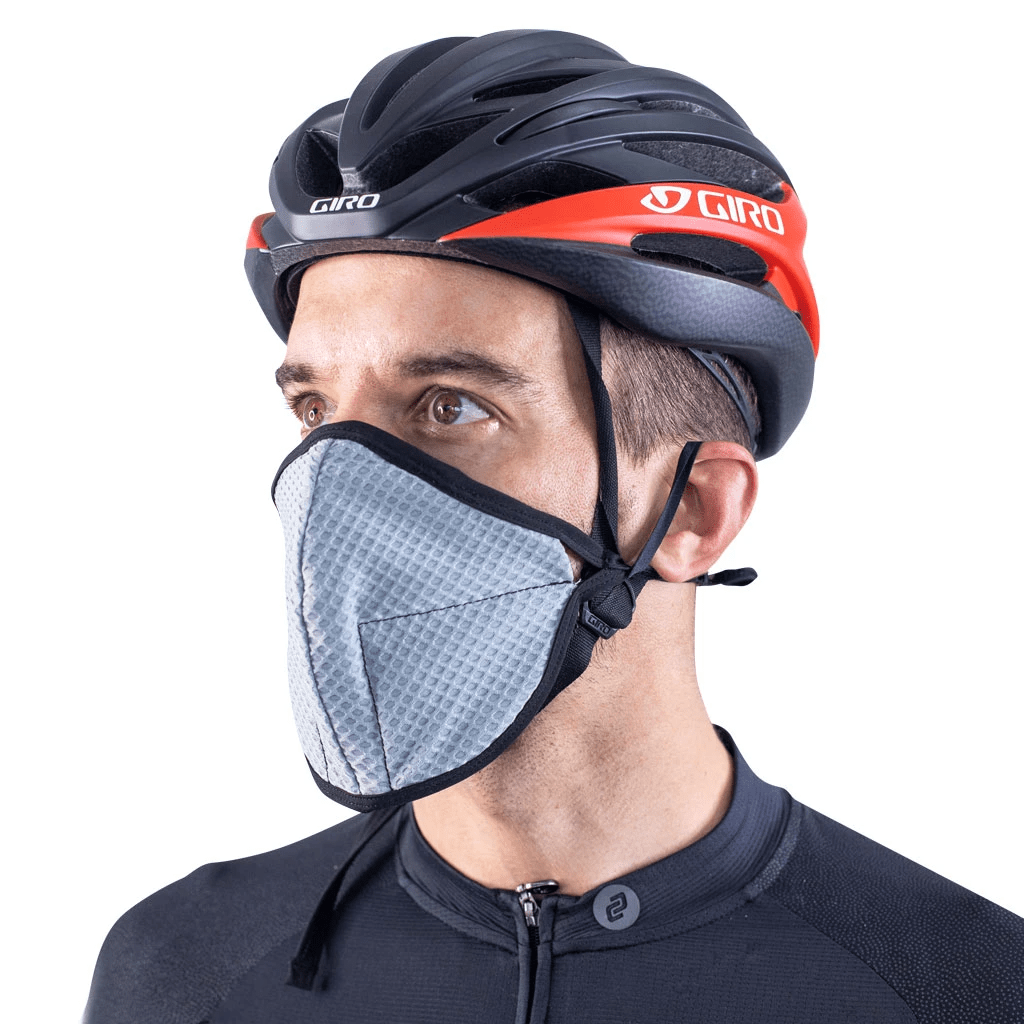 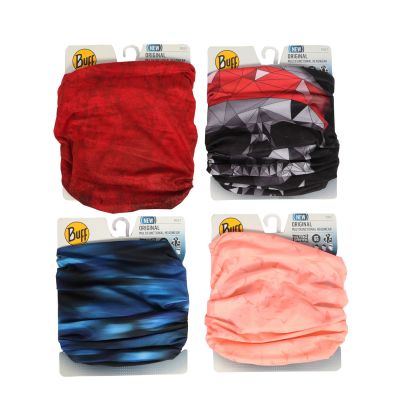