This Is How To Build Superhero Muscle At Any Age

Mike Colter put on 13kg of muscle to play a superhero. Let Colter show you how it's done.

Imagine for a few seconds that you’re a 38-year-old actor who just landed a Hollywood dream job – playing a Marvel superhero. But there’s a catch: you’ll need to pack on 13kg of muscle, despite your sciatica, so you can realistically kick ass like a bulletproof superhero. That’s exactly what happened to Mike Colter in 2015. He was holidaying in Paris when he got the news, and he knew the transformation into Luke Cage for a Netflix series wouldn’t be easy.

But in four months, Colter went from 93 to 106 kilograms, despite bouts of overtraining and a torn rotator cuff during filming. And he’s maintained his physique, proving that it’s never too late to turn your comic fat to Marvel-lous muscle. Here’s how Colter did it – and how you can, too. 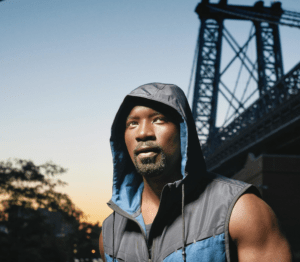 Put Pins In Your Workout

Unlike many celebs, Colter didn’t have a personal trainer or a nutritionist shadowing him. He consulted with trainer Salim Rahman for a few months but did most of his own research, studying up on the best fitness and workout ideas the Internet had to offer. His favourite source was Pinterest, where people routinely post new moves and pro- grammes. “I got great ideas on a weekly basis,” says Colter. This kept his regimen from getting stale, which is key to maintaining motivation and momentum.

Bring The Iron With You

When you’re trying to find time to train, is your career a villain? Then keep a pair of dumbbells on the job. Do a few curls when you have free time. This is often the only way Colter can work his exercise in. “I’ve kind of given up on working out when I want to,” he says. So he trains when he can, like during downtime on shooting days. In one dressing room on the set of The Defenders is a curling bar and a long barbell. The stunt rehearsal area has a bench that Colter uses for dumbbell presses. If you can’t get yourself to the gym, then bring the gym to you.

Related: Lessons From The Cape Town Trainer Who Gets Celebs Into Hollywood Shape

Even superheroes need rest days. Colter didn’t realise this when he began his training – and he paid the price. “I was so sore, I couldn’t get back in there,” says Colter, who had been a casual gymgoer before. 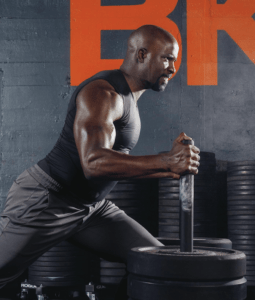 “When you’re younger, you can just look at a weight and feel a change. But at 41, I need more rest after I train, and I have to watch what I eat. If I don’t get a good night’s sleep, there’s just no point in working out.” You shouldn’t obsess on getting to the gym every day: stay focused on your long-term goal, and don’t sweat the short term.

Even if everyone at your gym is doing a certain exercise, that doesn’t mean you should too. Colter’s sciatica – shooting pain that radiates from the lower back – made him view deadlifts as his supervillain, but he also knew he needed to train his legs. So he found a different way: the reverse deadlift. To try it, set up as usual but with your legs in front of the bar. (Your butt is directly over it.) Then lift. Colter says the move feels natural – and best of all, it safely conveys the benefits of a classic deadlift.

You’re just picking things up and putting things down, so don’t take your gym time so seriously. That’s how Colter approaches everything, from his fitness regimen to his Luke Cage role to his Men’s Health photo shoot, where he cracked jokes and made fun of himself. (Colter is amused at how often he is mistaken for actors from other shows.) “It’s tough if you’re the lead guy on something, and everybody is afraid and nervous around you,” he says. “People don’t work well in those situations.” Go ahead and lift heavy. But otherwise, lighten up.