Design Your Body The Way Footballer Rio Ferdinand Did

There’s a ticking clock that hangs over the head of every athlete. Whatever their achievements in the sporting arena, however rigorous their preparation, their bodies will eventually stiffen, weaken, and ultimately let them down. It is the grim inevitability of sport.

Related: Do This Simple Tweak To Your Workout To Blow Up Your Muscles

Rio Ferdinand was one such sporting star. In a footballing career spanning 19 years, he won 18 trophies, including six Premier League titles and a coveted Champions League. He remains one of the most capped English players of all time. But in 2015 – aged 36 – Ferdinand waved goodbye to the only life he’d ever known.

The physical slump was immediate. “For those first few months, I didn’t do anything.” he says. “You look at old teammates and other former players, and few of them are in shape. They don’t entertain the gym. But you’ve got to understand, most of them were in the gym for 25 years. Running, every day. I hate running, actually hate it.” And so, in most cases, the paunch grows and the fitness goes. “I had a bit of an awakening,” he says. “I ran to catch a train, about 100 metres. I got on, and I was sweating like I’ve never known. I was in agony! Luckily, no-one was on the train; because if they’d seen me, they’d have thought ‘this guy’s never ever done any exercise’. I’d never felt like that; it was embarrassing. The deterioration was so quick.” 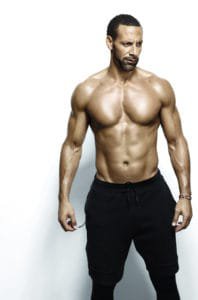 Ferdinand enlisted the help of pro rugby player-turned-personal trainer Mel Deane, and began a programme built around lifting weights. Very heavy weights. Ferdinand would work out, as he still does, four times a week, often more. But what began as a purely physical endeavour soon took on an unexpected therapeutic quality – offering brief moments of solace during a period of emotional pain.

Related: This Guy Lost 34KG Thanks To A Rugby Ball

In May 2015, his wife Rebecca, the mother of his three young children, died very suddenly. She had previously received treatment for – and seemingly overcome – breast cancer. But the cancer returned. Suddenly, he was solely responsible for three kids under the age of 10. The grief was overwhelming – a feeling of anguish he dealt with by distracting himself with work, his children, and training.

Just how significant a role did training play as a coping mechanism? “Huge, yeah. Just huge,” he says emphatically. “It enabled me to free my mind. I’m simply happier when I’m working out, and I think everything else flows better. Until you start working out regularly, you don’t understand it,” he says.

“It can be the most chilled-out hour or 20 minutes of your day. So why would you miss out on that?”