"Few people last once they see what it really takes to fight like a pro.”

“Many people walk through the door, thinking they are the next Conor McGregor. Few people last once they see what it really takes to fight like a pro.”

Chris Bright looks on as his charges are pushed to the limit of their physical capabilities.

“We don’t have any secret recipes. Here we stay humble. Here we work hard. Nothing comes easy at PESFA,” he adds.

In recent years, PESFA (Port Elizabeth Submission Fighting Academy) has cemented itself as a breeding ground for fighting talent, and head coach Chris Bright is widely regarded as one of the pioneers of the South African MMA (mixed martial arts) scene.

Dozens of people fill the mats at PESFA on any given day – teachers, lawyers, builders, bankers – come in after their 9-to-5, looking to stay in shape through MMA training. However, the bulk of Bright’s time goes into a small pool of highly talented individuals, training up to six hours every day to prepare themselves for the moment the cage door slams shut behind them.

But before they enter the arena, and after they leave, they still deal with a multitude of personal trials that set them even further apart from every other person that wanders into the gym.

For Luthando Biko, the massive gold belt around his waist, labelling him the best bantamweight in the EFC (Extreme Fighting Championship), almost seems out of place. Not because he isn’t worthy of it, but because the unassuming, soft-spoken Biko is one of the most humble and least flashy people you would ever meet.

That is until he steps into the arena.

Many of his opponents have underestimated the 29-year-old from Kwazakhele in Port Elizabeth. At only 1.5 metres tall, he is the smallest contender in the organisation’s bantamweight division, but made a name for himself by laying waste to the heavier featherweights over the past few months.

The former Commonwealth judo champion had no trouble tossing bigger men around the cage, and previous challengers could not match his frenetic pace. His small stature made for awkward matchups with taller opponents, often leaving them open to high kicks and volleys of heavy punches.

And in November, after five hard-fought rounds against England’s top ranked Cal Ellenor for the interim title, the gold belt was wrapped around his waist.

“This is only the beginning. This title feels good, but it’s not my goal. I have bigger things waiting for me and the hard work starts now,” says Shorty.

And he is no stranger to hard work and adversity. With no father in the picture he had to help his single mother raise his brother and sister. Employment opportunities are in short supply in his impoverished neighbourhood, and it seemed he would follow many of his peers down the road of crime and gangs. Luckily, martial arts, more specifically judo, offered Biko a way to make ends meet. 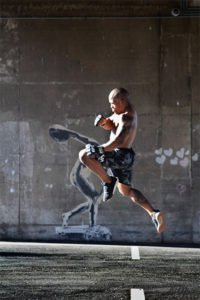 The Eastern Cape Academy of Sport offered him the opportunity to see the world, competing as far afield as Morocco and Japan on his way to a professional fighting career.

A fellow judoka introduced him to MMA and it was not long before the EFC came knocking. But his pro career got off to a rocky start.

“Call it inexperience, bad cardio or an adrenaline dump – it doesn’t matter. After the first round my body and my mind just shut down. I lost and felt broken. I knew I needed to work harder, because I never wanted to feel that way again.”

Fast forward two years, and now with a title belt around his waist Biko looks to uplift his community by showing them what hard work can achieve.

“The welcome I received when I came home was overwhelming. To hold the title in one hand and my 1-year-old son in the other made me realise how much I can mean for the future of my community.

“My career is not just for me, but for everyone around me. I want to give people a role model that shows them hard work pays off.”