Plus three spine-saving power moves so you can strengthen your core should you ever find yourself in a similar situation.

In case you haven’t heard, actor and action movie legend Arnold Schwarzenegger was attacked from behind at a sporting event in Sandton on Saturday —and of course fans were there to record the incident and were quick to post on social media.

It happened during a skipping event at the fourth annual Arnold Sports Festival at the Sandton Convention Centre. While Arnie was chatting with fans and filming the event for his own Snapchat, a man approached him from behind and knocked him into the crowd with a flying kick. The assailant was immediately apprehended and escorted out by security.

The first viral video (which has been viewed nearly 9 million times) caught the action from the front, making it seem as if Arnie fell to the floor when he suffered the blow. In actual fact, the Terminator barely stumbled, taking the blow in his stride.

There’s a reason Arnie was barely fazed by the kick. Firstly, he tweeted that he thought he was just being jostled by the crowd, which happens “a lot”, and secondly, he’s built like a tank, with a core of steel.

In everyday life, your core has one directive: to stabilise your spine. By forcing your core to brace against three kinds of potentially spine-damaging motion – rotation, flexion and extension (and fan-crazed drop kicks from behind) – you’ll find out just how strong it really is, says personal trainer Kevin Carr. Sculpt real-world strength and stability with the following three hard-core power moves, and build a six-pack that saves your spine. Add them to your weekly routine, and you’ll soon notice greater stability and power in everything you do – not to mention an increasingly chiseled profile, and Arnie-esque self-defence skills.

Perform these exercises as a circuit, moving from one to the next without resting. Once you’ve finished all three exercises, rest for one minute and then repeat the circuit. Complete a total of three circuits (if you can).

Plank Row (Anti-Rotation)
Assume a push-up position while gripping a pair of dumbbells that total half your body weight. Row the weight in your left hand to your ribs, then repeat with the right. Continue alternating sides for 20 reps. 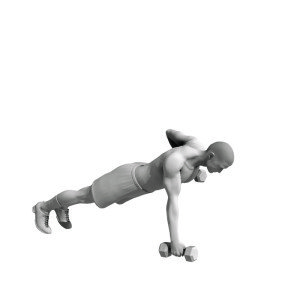 Farmer’s Walk (Anti-Flexion)
Grab a pair of dumbbells equal to your body weight and let them hang naturally at arm’s length next to your sides. Keeping your chest up and shoulders back, walk forwards for 36 metres.

Related: How Actor Tim Robards Forged An Iron Core And A Better Body 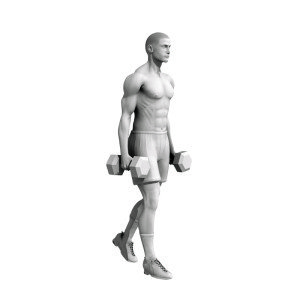 Ab Wheel Rollout (Anti-Extension)
Kneel on the floor and grab the handles of an ab wheel. Roll it forwards as far as you can. Use your core to pull the wheel back. Do 15 reps. No ab wheel? Use a barbell loaded with 4.5 kilogram weights instead. 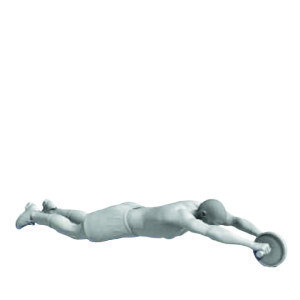 If there’s one thing we’ve learned from his movies, it’s that it takes more than a single kick to take down Arnold Schwarzenegger—and only a fool would try. The big guy isn’t pressing charges and is urging the public to not give the perpetrator the fame he craves, and you guessed it, he says “he’ll be back”.

Update: A lot of you have asked, but I’m not pressing charges. I hope this was a wake-up call, and he gets his life on the right track. But I’m moving on and I’d rather focus on the thousands of great athletes I met at @ArnoldSports Africa.

Related: The 50 Fittest Action Heroes And The Rules They Use To Maintain Movie Muscle