6 Lessons You Can Learn From MotoGP Ace Brad Binder

South African motorcycle-racing sensation Brad Binder will race in the elite MotoGP class next year. Binder will become the first South African to race MotoGP™ in the four-stroke era and the first to compete in the premiere class since 2000.

It is something of a coming-of-age for the man who has made his way through the ranks from Red Bull MotoGP Rookie Cup, to Moto3 (claiming the 2016 Moto3 World Championship title) and onto Moto2 where he finished third overall standings in 2018 and second in 2019.

Related: This Guy Just Made History On A Bike Becoming The First South African In 36 Years To Win A World Championship

The 24-year-old will line up alongside the likes of five-time MotoGP champion, Marc Márquez and the legendary Valentino Rossi, when he climbs aboard his Red Bull KTM Tech3 in 2020.

But, even though the Red Bull rider had a very successful final season in Moto2 (the ‘lesser class’) – winning the final race in Valencia GP, his third on the trot and fifth for the season – the step up to the premier class will have its challenges.

MotoGP bikes are purpose-built race machines, custom made from the ground-up using high-tech materials such as carbon fibre, titanium and magnesium. They can reach speeds of over 300km/h but are not only faster but heavier and far more powerful than Moto2 bikes.

Binder is currently preparing for the physical and mental challenges that come with such a step up. You may not be about to go race MotoGP, but you can use his techniques to take a step up in your life in 2020:

“In early December I spent a week at the Red Bull High Performance Centre in Austria. There they tested and measured everything imaginable related to my athletic fitness – they ran various tests, checking my lower- and upper-body strength; my core strength; base fitness and Vo2 max; among others,” he explains.

From here an expert team has plotted a training programme for Binder to turn his weaknesses into strengths over his ‘off’ season.  “I go back in mid-January and then I will be able to see where I’m at and what I’ve improved and where I need to work some more,” he says.

“In short it is a much more physical bike to ride, so I have to work harder physically than in the past.”

He explains how he is going from racing a bike with three cylinders to four, “There is a lot more rolling weight so it is a lot more difficult to get the bike to roll into corners. But it is not just that, I have to control the extra power when opening the throttle out of the corner and you have carbon brakes so your stopping power is so incredible. In short it is a much more physical bike to ride, so I have to work harder physically than in the past.” 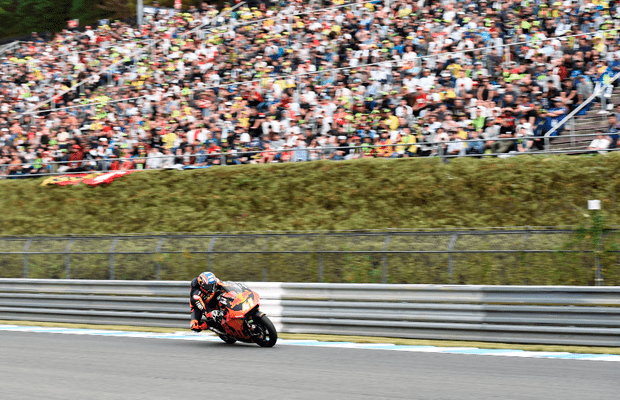 Set (And Stick To) A Routine

According to Brad Binder, his biggest mental trick (and one he won’t change going into MotoGP) it so be relaxed and focused before he goes out track. He does this by following the exact same routine before he gets on the bike for a test, qualifying lap or race.

“Exactly half an hour before each session I go do my warm up – which is exactly the same every time. Then I go into the box and put in my ear plugs and my chest plate. In the same order every time. Once I’ve gone through this ‘circuit’ of things, I always feel ready and in a good mindset,” he says, adding that “at the same time I don’t like to overthink stuff.”

Turn Those Weaknesses Into Strengths

Binder knew from mid season already that he was going to make the step up, but at the same time he still had half a Moto2 season ahead of him. “I started to prepare then already for the MotoGP bike,” he says. “In the Moto2 class the muscles you use are very similar because your position on the bike is very near the same. I have tried to gain a bit of muscle and I’ve managed to get a lot stronger than mid-year, but now – December and January – are our two months where we really get to prepare and work on our base fitness and I am going to work hard on getting stronger and put on a bit of muscle.”

Related: This Workout Will Help You Build Muscle In The Comfort Of Your Home

Patience Is Still A Virtue

According to Brad Binder he has had a few discussions with some of his friends who have already made the step up. “They all have the same answer,” he says. “It takes time… It’s not easy – because it’s a completely different world, with so many big differences on and off the bike.” Binder is going to take it step by step and not get ahead of himself. “I want to take my time and really understand what I’m doing and as soon as I do that I’m sure everything will fall into place.”

Don’t mistake patience for timidness, however. If you want to be at the top of your game, you need to walk in confidence, Binder believes. “It differs from person to person, for sure,” he says. “I know when I stepped up classes I haven’t been fantastic straight away but I always worked hard and got where I wanted to be. And, as soon as I get a result once or get to the front once, I know I can do it every weekend.”

“Aside from racing against the best riders in the world on the best bikes in the world, the one other thing I have already noticed is how crucial time management will be,” Binder says. “The amount of media and events is becoming more than the riding – I’m flying to signing sessions and media junkets, so what I’m really going to have to learn is fitting in my training among the insane schedule. I’m excited for the challenge and can’t wait for what is to come.”

To follow Brad Binder and to learn more about what the 2020 MotoGP season will bring, click here.