4 Rules For Getting Ripped At Any Age

Yes, you can sculpt a six-pack like this guy did. We’ll show you the four fundamental rules to make that happen

Months ago, Men’s Health US fitness advisor Bill Hartman was like many of us: in decent enough shape, but heading in the wrong direction after years of eating on the go while working long hours. Sure, he exercised hard a few days a week and ate healthy food. “But I didn’t pay attention to portion sizes,” he says. A snack of cashews, for example, often became five or six handfuls, leaving him with a massive calorie tab. With the big 5-0 approaching, Hartman, a co-owner of IFAST Gym in Indianapolis, needed some inspiration.

Related: The 4 Things You Should Be Doing For A Six Pack

“Jack LaLanne would often do a big physical challenge on his birthday,” he says. “I thought maybe I should do something a little crazy too.” Hartman’s goal: to get shredded and regain the shape he was in back in his 20s, when he competed as a bodybuilder. He would need to muster more effort this time, because losing fat and building muscle becomes harder with every passing year. After age 35, diminishing testosterone and slowing metabolism add to the challenge. Still, the path to a bodybuilder physique is the same: strict diet and exercise.

First, Hartman devised the perfect fitness plan. Next he recruited his friend, Men’s Health US nutrition advisor Mike Roussell, to build him a nutrition programme that would satisfy his appetite and sculpt his core. “Then it all came down to following the plans,” says Hartman. Now Hartman is down more than 11 kilograms, and his body fat hovers around 7%.

Related: One Minute To Ripped Abs

Losing fat and dropping kilos also benefited Hartman’s general health by reducing inflammation and improving his insulin levels, two factors that have health implications as we get older. “Smaller dogs live longer,” says Hartman, using an example from nature. Want to get your bark back? Just follow the four fundamentals of Hartman’s programme.

Related: 10 Minute Fat Finisher That Will Carve A Six Pack 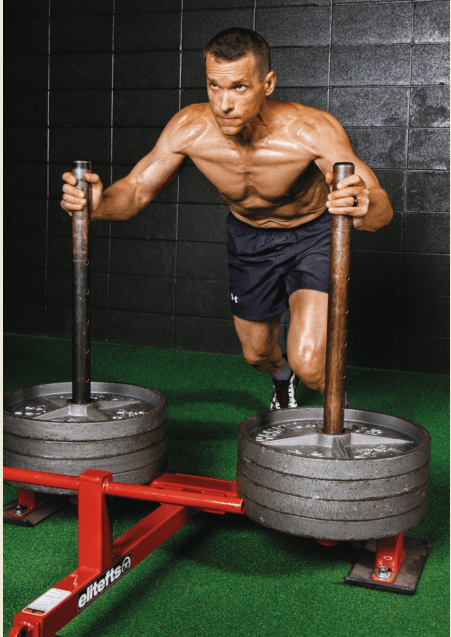 Many men think the only way to develop their abs is to hammer in the gym and slash their calorie intake. But if you do too much too soon, you could burn muscle and burn out mentally. Yes, big goals require big measures. “But if you go extreme right away and then stop progressing, where do you go from there?” Roussell asks. So start by cutting 800 to 1 200 kJ a day from your diet. Stick to it. Once you reach that plateau, cut out another 800 to 1 200 and repeat. Hartman, for example, launched his plan by dropping to 9 000 daily calories; then he cut his intake further to 8 000 and ended at 7 300.

Be flexible in the gym

A typical training programme prescribes a specific number of sets, such as 3 or 5. But because your performance can vary from day to day based on influences such as sleep and stress, that prescription might be too rigorous, or too easy, on any given day. That’s why Hartman based his training programme around “autoregulation” sets. In those, your reps stay the same but the sets can vary depending on your performance. You do as many as you can until your form breaks down or your strength gives out. This strategy accomplishes two things: it hits your body with a stimulus that’s enough for you to make progress, and it keeps the brakes on to prevent you from digging too deep and sustaining an injury.

Related: These Exercises Will Give You An Injury, Stop Now

Every Saturday for the past decade, Hartman has taken his gym’s interns out for lunch at a local Mexican cantina to talk shop, decompress, and review the week. “Obviously the fajitas, margaritas, and all the chips I could eat didn’t fly anymore,” says Hartman. So Roussell helped him find a meal he enjoyed that also worked for his diet. The solution? A spicy chicken breast on a bed of greens. “Maintaining normal rituals during your diet is key to sustainability,” says Roussell.

Midway through his transformation process, Hartman had to travel to China for 10 days. He stuck to his nutrition plan by packing 24 protein bars, 10 packages of biltong and four packs of cashews. “When you’re committed to a goal, your nutrition decisions need to be made beforehand,” Roussell says. At home, Hartman stuck his eating plan on his fridge so he and his wife could easily shop and cook around it. It worked, for both of them. “She also lost weight,” says Hartman.

Why cardio is your weightloss turbo

Going balls to the wall in the gym six days a week may actually sabotage your gains.
Here’s why: Your body needs time between hard gym sessions to recover and build muscle. If you limit that time by doing tough workouts more than two days in a row, your muscle can’t rebuild. Instead, it just keeps wearing down. To make progress between his hard sessions, Hartman did relaxed cardio workouts. They helped increase bloodflow to his muscles, boosting his recovery. Hit the stair climber or do a body-weight circuit of squats, stepups, inverted rows, and pushups. Keep at it for 45 to 60 minutes. Try to keep your heart rate between 120 and 150 beats per minute.

Related: The Most Effective Interval Workout To Burn Fat

Use this optimal mix of carbs, fats and protein for fat loss, muscle growth and energy