This guy grabbed a bottle of single malt whisky, called up a few mates and explored SA’s untamed corners for three solid years.

Giant elephants, stampeding buffalo: our national parks are wilder than ever.

Related: The Gadgets Every Adventure Man Needs To Own

Scott Ramsay realised these escapes were sitting right on our doorstep, grabbed a bottle of single malt whisky, called up a few mates and explored SA’s untamed corners for three solid years. These are his ultimate adventures: 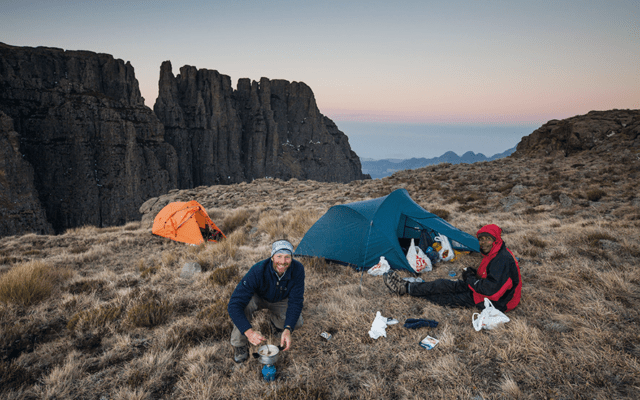 The northern Drakensberg is the most spectacular part of South Africa’s biggest and longest mountain range. Over millions of years, powerful rivers have carved innumerable gorges and valleys. These rivers supply the country with 30% of its fresh water, making these mountains one of the most important protected areas.

The isiZulu name for these ramparts is uKhahlamba, or Barrier of Spears. It’s a great description of some of the most rugged terrain in the country.

Lying between Cathedral Peak and the Amphitheatre, the remote, community-owned land of the Mnweni area can be an intimidating and unpredictable place, for newcomers and regulars alike. The terrain can quickly be shrouded in mist, cloud, rain or snow at any time of year.

Related: Survive the Apocalypse (And Camping With The In-Laws) With These 7 Awesome Gadgets

There are few marked paths and the high cliffs drop away sharply from the 3 000-metre escarpment; there are, consequently almost no tourists. The land is traversed only by Basotho dagga smugglers and intrepid hikers. But the danger and risk is absolutely worth it.  “In all the Drakensberg, the spectacular peaks, the beautiful valleys and the people of the Mnweni have made this my favourite region,” said John Hone, the legendary photographer who spent months capturing the soul-shaping landscape. “The Mnweni, in my view, has the very finest inland scenery of the whole of Southern Africa.”

It’s best to hire a local mountain guide, like Caiphus Mthabela, who lives at the bottom of the mountains with his family, horses and cattle, and spends several months a year guiding hikers across the peaks above. Caiphus once guided me to the top of Mnweni Pass, a lung-busting and leg-aching route that climbs steeply up a narrow gorge. In the foothills, we saw only two young shepherd boys. A few hours later, we emerged into the lonely heavens above, and set up our tents to the most spectacular view in all of South Africa. At sunset, I sipped some single-malt whisky that I had lugged up the pass. It tasted like liquid gold.

Just Do It: Call Caiphus on 073-603-9107 or email him at caiphus@emachibini.co.za. He charges from R600 per day, depending on the length of the hike and the size of the group. 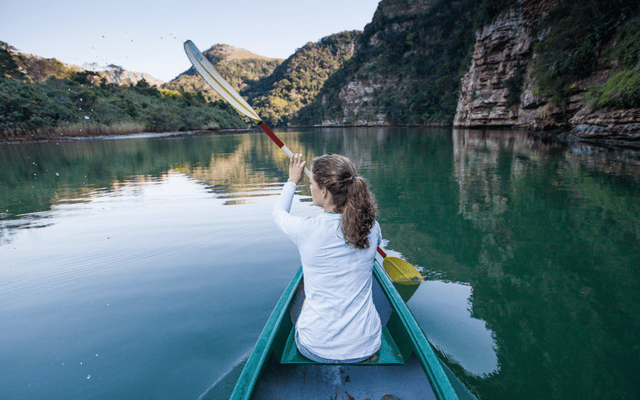 Bathed in gentle temperatures, the coastline between Port Edward and East London is caressed by tropical climes all year round, courtesy of the warm Agulhas Current, which flows powerfully from near the equator to the tip of Africa in the south. (It’s the fastest moving ocean current in the world, apparently.)

The most untouched part of the Wild Coast (so named for the huge waves that pound the coast) is Pondoland, between Port Edward in the north and Port St John’s in the south. And the undoubted gem in this special area is Mkambati Nature Reserve – a small, remote reserve deserving of big superlatives. This protected area may be small, but it’s one of South Africa’s most photogenic spaces. At only 70 square kilometres, it’s one of only two protected areas that conserves the Pondoland Centre of Endemism, a unique collection of 2 200 species of flora that has adapted to the isolated sandstone soils in a subtropical climate. Mkambati is home to at least 196 endemic species, found only here and nowhere else on Earth.

Related: We Pick The 5 Best Waterproof Watches To Be Your Wingman On Land And Sea

The sandstone geology found in the northern part Wild Coast has also given Mkambati its defining waterfalls and deep gorges, carved out by clear rivers. On the southern boundary is the Msikaba gorge, and on the northern is the Mtentu River. Both are untouched and rarely visited.

But there are troubles in paradise: mining companies are applying to rip up some of the coastal forest and dunes to dredge titanium from the sand north of the reserve. I have no idea why anyone would want to  destroy such a place.

Just Do It: Stay at the laid-back chalets of Mtentu River Lodge on the northern border of the reserve. You can access the reserve – just borrow one of the lodge’s canoes to cross the river. From there you can walk all over the reserve if you wish; there are no gates or fences – although you are expected to pay an admission fee if you happen to bump into a ranger. Although you can definitely get used to chilling at Mtentu, everyone should paddle up the Mtentu River gorge and explore the small tributaries on foot, where there seem to be waterfalls at every turn. R700 per cabin per night, food R340 per adult per day. mtentulodge.co.za 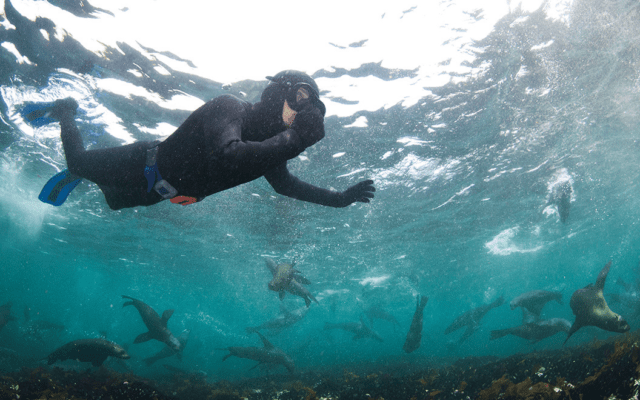 We slip off the rubber duck near Duiker Island off Hout Bay, drop under the surface of the cold, clear ocean and cross over into a wild world. Hundreds of seals whizz past us, each one somersaulting and zigzagging in choreographed chaos.

I don’t know where to look because there’s so much to take in. Millions of bubbles sparkle in the cobalt water, as the acrobatic animals blow air through their nostrils. The older seals keep their distance, but their impressive size and speed are awe-inspiring to see. The seal pups are just a few months old and are the most playful, nibbling on my fins. Some swim right up to my mask, smiling at me with bulging eyes, sharp teeth and long whiskers. Others let me scratch their fur just for a moment, before darting off and returning to play again. A few jump out of the water into the air, crashing back down on top of us. It’s a game they never get tired of, and their enthusiasm is infectious.

Related: 4 Questions To Ask Before You Buy A Watch

“These are totally wild animals,” says Steve Benjamin, owner and boat operator of Animal Ocean. “But they’re completely comfortable with our presence here.”

A zoologist and ichthyologist, Benjamin knows the seas around Cape Town better than most. The Cape Peninsula’s shores are protected, falling in the Table Mountain National Park Marine Protected Area, which includes six “no-take” zones that are off-limits to fishermen. These waters harbour some of the richest and most diverse oceanic life in Africa, a result of the cold Benguela current mixing with the warmer Agulhas.

Just Do It: Snorkelling with seals costs R800 per person. Wetsuits, mask and snorkel are provided. Sharks are not a threat, because the shallow waters around the island protect the seals (and humans). animalocean.co.za 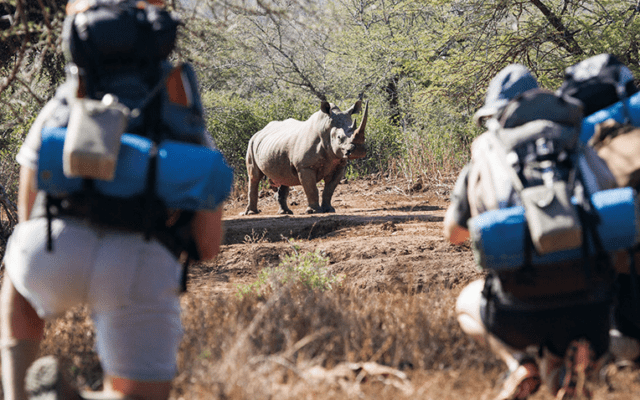 In the inky dark night, a group of eight people lay fast asleep on the banks of the White Umfolozi River.

Except me. I was wide awake. It was my turn to keep watch, to stoke the fire which would warn wild animals of our presence. We were sleeping on the ground in our sleeping bags, without tents or fences to protect us. The only light came from the shining stars and the burning fire.

The Primitive Trail takes hikers for five days through Hluhluwe-iMfolozi Park’s 300-square-kilometre wilderness area. Established in 1895 to protect the last 50-odd white rhino on Earth, the protected area is one of the oldest in the world. Earlier in the day, our armed guide Nunu Jobe had spoken to us about the ritual of keeping watch around the fire, something that has been done on every trail since the first one in 1957.

Related: How Hiking Can Make You Just As Strong As Those Dudes Pumping Iron

“In the city we work all day, then we eat, we watch TV and go to sleep,” he explained. “There’s no time for thinking about the important things in life, for realising our true place on this planet. This is your chance.”

I was pondering Nunu’s words when the dense night air reverberated with a deep, guttural rasp. A few moments of silence, then I heard it again. And again. The sound was unmistakable, like a saw cutting through thick wood: leopard. I shone my head torch in the direction it came from and two yellowish eyes blinked back at me. For several minutes the leopard claimed his territory, his calls echoing through the bush, telling others this was his turf. I wasn’t about to argue. Out here, the animals rule. My place in this world suddenly seemed very clear.

A short three-hour drive from Durban, far from the highways, shopping malls and crowds of humanity, we were now alone, among wild animals

Just Do It: The wilderness trails are guided by two armed rangers, and last from two to five days, starting from R2 350 a person. The four-night trail costs R2 900 per person. Food is included, but participants share cooking responsibilities. Trailists carry their own backpacks, which are supplied. kznwildlife.com or wildernesstrails.org.za 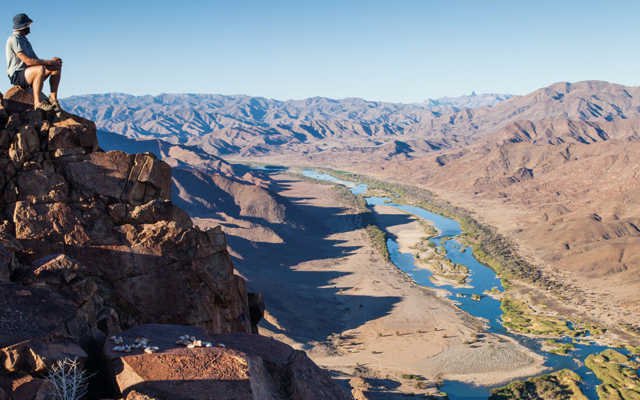 I once escaped into the wilderness of the Richtersveld. In the few years before, I’d lost myself. The urban world I knew didn’t make sense to me. A lot of social media, but not much real connection. So I headed north into the desert and set up camp alone alongside the Orange River.

The mountains here are a fortress, protecting this harsh but fragile desert from the covetous fingers of capitalism. Soon my gaze fixed on a charismatic peak that stood out above the others: an agglomeration of gigantic boulders over 1 000 m high.

After a few days, a shepherd named Henry came past my campsite, on his way to let his goats drink from the river. The land of the Richtersveld belongs to the local Nama and is rented to South African National Parks, so these wandering nomads have rights to let their livestock graze on the sparse vegetation. I gave Henry a Coke, and he told me the name of the mountain: Tatasberg.

Early the next morning, I set off up the mountain, carrying my camera and plenty of drinking water. As dry and hot as it can be, this is the most diverse arid region on the continent.

The Richtersveld is a critical part of the renowned Succulent Karoo biome. It’s a wonderland of weird and wacky plants and creatures; 30% of the world’s 10 000 succulent species occur here and nowhere else.

There are also plenty of scorpions: the perfect totem animal for an ancient, savage land. The massive boulders of the Tatasberg are 600 million years old, formed from magma that surged through the Earth’s crust. They’ve been here longer than anyone and they’ll still be here when humans have long disappeared. Perspective.

At the top I listened to the thunderous silence of the desert. The views hypnotised me – range upon range of mountains, and in between vast sandy valleys dotted with gemsbok. Through it all runs the great river, the home of otters, yellowfish and giant kingfishers. Real connection.

Just Do It: You must have a fully-equipped 4x4 to explore the remote mountains of this desert. Stay at the riverside campsites of De Hoop or Richtersberg (R215 per site, for two people), or in the mountains at Kokerboomkloof (R215 per campsite for two people) or at Tatasberg Wilderness Camp (R800 per cabin for two people). sanparks.org

*All rates correct at time of publishing.